Cremation or Burial: How to Choose What’s Best for You 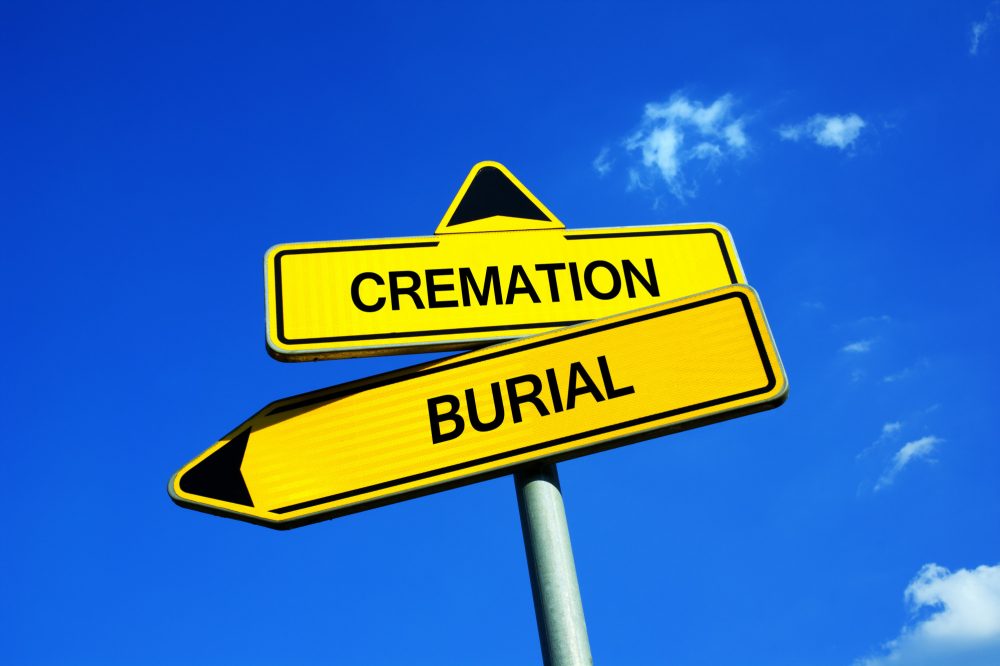 It’s morbid, we know. But have you thought about what you want to happen to your remains when you die? It might be an uncomfortable conversation to have, but it’s important your loved ones know your wishes so they can pay their respects properly when your time comes.

So, the big question is: do you want a cremation or burial?

Burials used to be the most popular choice. But nowadays 68 percent of Americans say they’re likely to choose a cremation over a burial.

If you need some help deciding between a cremation and a burial, keep reading for the key differences and how to decide what’s best for you:

First things first, let’s discuss the key difference between the two. Cremation is the process of incinerating the body to ash. A burial is when the intact body is embalmed and lowered underground, usually during a memorial ceremony.

While burials are the more traditional method of the two, the popularity of cremation is on the rise. Cremations rose from 48 percent in 2015 to an expected 54 percent in 2020.

An important thing to note is that just because a body is cremated, doesn’t mean you can’t also have a burial. Many people opt to have their cremains (cremated remains) buried, which is an option if you want the best of both worlds.

The main things that influence this decision are the cost, personal or religious beliefs, and the impact on the environment. Now, let’s break it down by each of these variables.

One of the main deciding factors for most things in life (and death) is the cost. Generally speaking, cremation is the more economical choice out of the two.

However, there are many different variables to consider for both methods. Here are the big things to consider when it comes to the financial impact of a cremation and a burial.

A direct cremation happens immediately after death and usually involves the body being incinerated with no official memorial or burial involved at all. While this is the most inexpensive method, most families want to have a more official ceremony to remember their loved ones.

Regardless of what happens after the cremation itself, the procedure can cost anywhere between $700 and $2,000 depending on your state and the organization you go to.

For utmost affordability, it’s recommended to go directly to a crematorium rather than a funeral home. It’s widely understood that most funeral homes will try to sell you additional things like expensive urns or caskets for ash burials.

On average, a nice urn costs around $250, but you can find cremation urns for a lot more or a lot less, depending on your taste. Some people decide not to use an urn at all and scatter the ashes in a beloved place, or a number of different places.

There are countless things you can do with your loved one’s ashes. You can have them planted into a tree, made into a jewelry piece, or even pressed into a record.

If your budget is the main consideration when deciding between a cremation or traditional burial, direct cremation is the least expensive option.

When considering the cost of a traditional funeral, there are numerous things to take into account. A basic funeral service costs around $5000 on average. This price includes the service itself, transportation of the body, costs for staff and facilities for the service, the hearse, and memorial print items like a registry book and memorial cards.

In addition to the costs associated with the service, there are additional costs for the preparation and embalming of the body, the grave plot, casket, and headstone.

Most traditional viewings require an additional “opening and closing” fee, as well. This brings the total for an average funeral with viewing and burial to $10,000.

For some families, the cost is not the most important factor when deciding between a cremation and a burial. Many people have strong personal feelings about the nature of cremation versus burials. This all comes down to respect for the dead.

It’s interesting to note, however, that respect for the dead means different things to different people. Some people are from the school of thought that a body cannot be properly mourned unless it is fully intact.

Others believe that it is not acceptable to leave an intact body underground to decay. While there is no right or wrong answer, it’s important to consider what it means to you, personally, to respect the dead.

For many, religious views will be the single deciding factor. The Catholic church, for instance, prohibited cremation until the 1960s. It’s now acceptable for a Catholic person to be cremated. However, the remains must be buried instead of kept or scattered.

Other fundamentalist Christian groups including Baptists do not allow cremation, nor did traditional Judaism until recent years.

In some cultures, burials are not accepted at all and cremation is the required choice. These religions include Hinduism and Buddhism. The Muslim culture forbids cremation.

If your main concern is the environment, there are conflicting views about whether traditional burial or cremation is the better choice.

Traditional burials are extremely toxic to the environment due to the formaldehyde used in embalming fluid and non-biodegradable material used for traditional casket steel.

However, the cremation process is also toxic as crematoriums emit a high concentration of mercury which is certainly a cause for concern.

The best bet, environmentally speaking, is a burial using biodegradable casket materials and opting not to embalm the body.

If you have an objection to both traditional burial and cremation for whatever reason, there are two new methods being introduced into the market: promession and alkaline hydrolysis.

Promession is a process invented in Sweden that uses liquid nitrogen to cryogenically freeze the body until it is essentially freeze-dried. This procedure is still in development and could be available in America in the coming years.

Alkaline hydrolysis (also known as bio-cremation or aquamation) is another option that is currently legal in some states, where the body is disintegrated using mostly water.

Now that you know the key differences when it comes to cremation or burial, you can make an informed decision. Once you’ve had the tough conversation with your loved ones, you can rest easy knowing your decision will be respected.

If you enjoyed this article, please check back soon for more informative guides like this one.