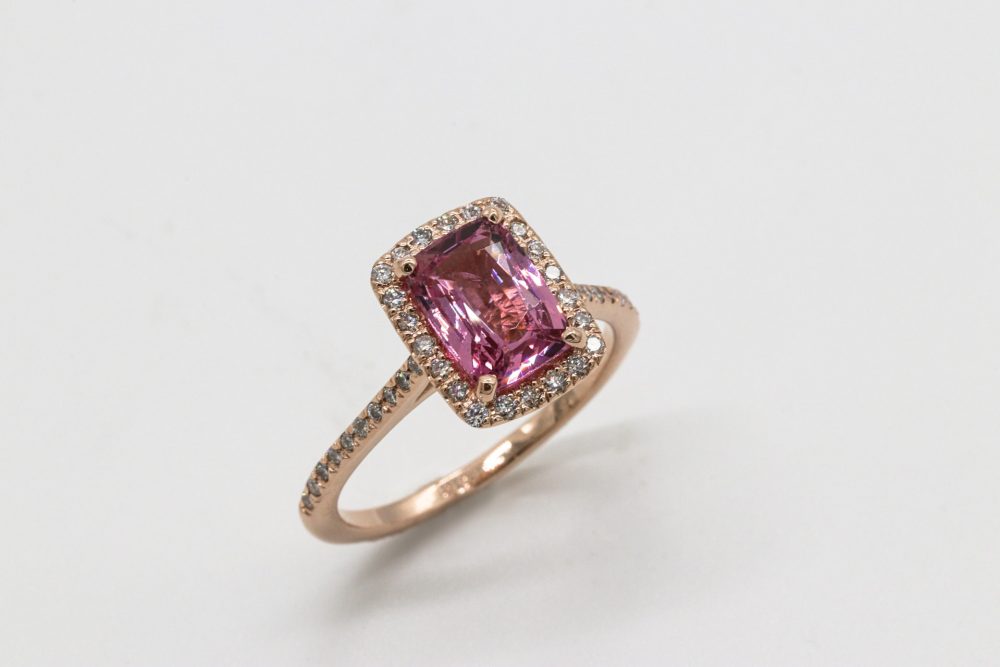 Years of cleverly planned marketing campaigns have made us believe in the power of sparkling and transparent diamond rings. They’re the epitome of the expression of love and commitment. But there’s an entire universe of diamond rings beyond clear solitaires.

That’s right! Diamonds are available in a broad spectrum of colors, ranging from green and blue to yellow and orange. You’ll find dainty diamond rings even in pink. In fact, pink diamonds are one of the rarest and most expensive forms of diamond in the world:

The Allure of Pink Diamonds

While they’ve been around for centuries, the popularity of pink diamonds has skyrocketed in the last couple of decades. They exude a certain class, elegance, and grace that’s perfect for adorning the hands of Hollywood’s elite.

It’s only natural that numerous celebrities, including Jennifer Lopez and Anna Kournikova, grabbed the spotlight for flaunting engagement rings with pink diamonds. While some of these relationships may not have stood the test of time, their gorgeous rings were surely etched in public memory for eternity.

Whether you’re planning to go engagement ring shopping or are just interested in the latest jewelry trends, we’ve got you covered. Check out these celebrities who ditched clear diamonds in favor of their pink counterparts and ushered in a new trend.

In 2002, Jennifer Lopez became one of the first celebrities in recent times to possess a fancy intense pink diamond ring. It happened at the peak of the Bennifer frenzy when Ben Affleck decided to propose to J.Lo with a diamond ring in her favorite color.

Affleck consulted world-renowned jeweler Harry Winston and bought a 6.10-carat radiant cut pink diamond ring with white diamond accents on the sides. The diamond, one of the rarest in the world, was discovered in the 17th century. It wasn’t until the 1940s that Winston lay his hands on the precious stone.

It cost Affleck a whopping $1.2 million and became one of the most breathtaking pieces of jewelry of the decade. While it was the first of many engagements for J.Lo, the ring was nothing short of a trendsetter.

Maybe it’s the power of the rare diamond that brought J.Lo and Affleck back together after almost two decades. Whatever is the case, Bennifer fans can’t wait to see if, when, and with what rare piece of jewelry Affleck decides to pop the question this time around.

A diva of Mariah Carey’s stature deserves a larger-than-life engagement ring. Lucky for our favorite Songbird Supreme, Nick Cannon, her husband-to-be, was well aware of that before the couple tied the knot in 2008.

It’s only natural that Cannon got the multi-platinum singer a 17-carat emerald-cut pink diamond ring with two larger diamonds on either side of the stunning center stone. The ring also featured more than 50 smaller diamonds surrounding the pink sparkler, and was designed by Jacob Arabo of Jacob & Co.

It set Cannon back a mere $2.5 million and became one of the largest and most pricey celebrity engagement rings. Mariah went through a couple of more engagements with Nick. And every time the couple renewed their vows, the new ring was more glamorous than the previous one.

Pop sensation and teen heartthrob, Enrique Iglesias broke the hearts of many fans when he proposed to Russian tennis star, Anna Kournikova in 2004. But their engagement wasn’t the only news that made it to the headlines.

Although they’ve had a tumultuous relationship, the couple has always found their way back to each other. Perhaps, rare diamonds do help forge lasting relationships against all odds.

Who doesn’t adore Ryan Reynolds and Blake Lively for their humorous banter on social media? The couple is known to often troll each other on Instagram in the most hilarious ways. But that isn’t the only reason we can’t get enough of the power couple.

Despite the public repartee, the Deadpool actor surely knows how to woo his lady love.

Add a Pink Sparkle On Your Finger

The descriptions of these spectacular celebrity engagement rings must have you craving a pink diamond ring for yourself too. The only catch is that these diamonds tend to be very expensive, owing to their rarity. If your beau can afford an exorbitantly priced engagement ring, nothing like it.

If you’re on a budget but your heart is set on the pink sparkle, you might have to compromise on its size and clarity. Another economical alternative is to opt for synthetic or lab-grown pink diamonds.

Irrespective of whether you decide to get natural or synthetic diamonds, a pink diamond ring is the perfect choice. It’s a great way to make a statement without being flashy. And it’ll be something you have in common with Hollywood’s elite.