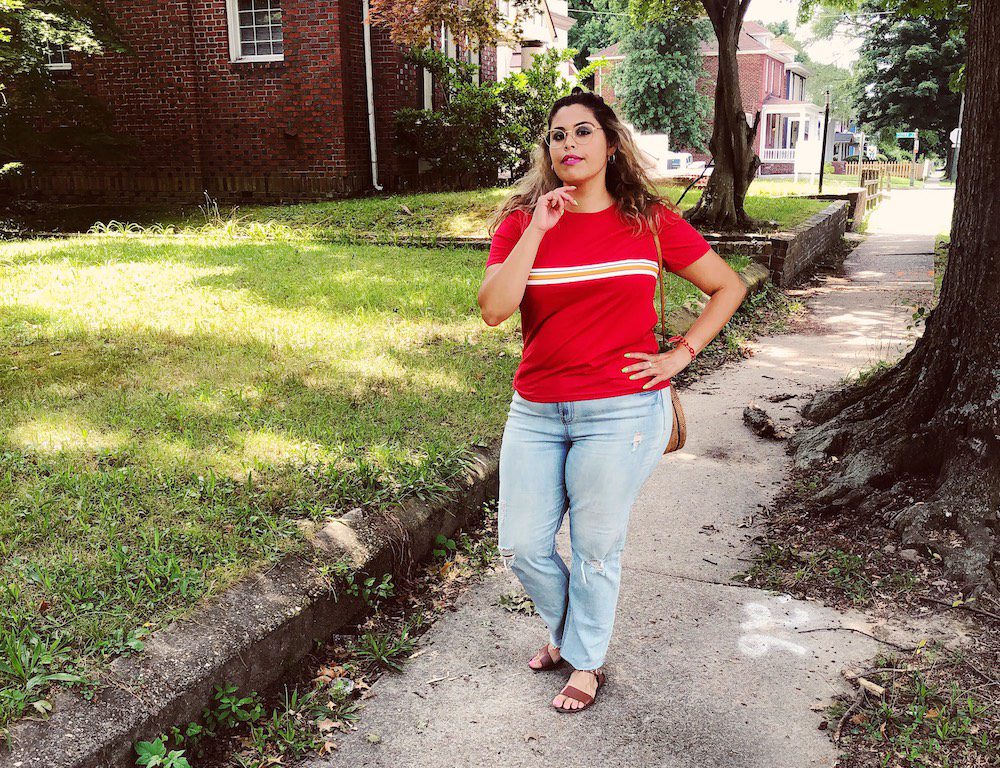 I’m strange (no pun intended), I have never been a fan of TV shows, especially those that end in a suspenseful way that make you want to watch the next episode, then the next, and so on. TV shows like that tend to stress me out in a way that is a bit too draining for me when I’m trying to wind down. Instead, I like watching shows where each episode ends in a way that makes me feel good; or ends with some sort of resolve. Shows like Law and Order, Bob’s Burgers, Friends, Seinfeld, and South Park (guilty).

I also spent an entire summer binge watching five seasons of Desperate Housewives. I think it was the summer of 2009, and I literally wasted my whole entire summer. I felt so guilty that I decided to avoid shows that suck you in like that. Then a few years back, all my co-workers started talking about Stranger Things, so I gave it a try one night. I arrived to work the next day with dark circles under my eyes and needing a venti cold brew and some Red Bull. Yes, I watched all eight episodes of Stranger Things season 1 in a single evening. Not my finest moment, but I was hooked.

When Stranger Things season 2 came out, I broke it up between two evenings, four episodes one night, and four episodes the next. I was still exhausted at work, but so worth it. I was actually devastated to learn that season 3 wasn’t going to be released on Halloween like the other seasons. What do adults even do on Halloween? Especially when it lands on a week night! I felt Netflix solved that problem, but nope. July 4th, 2019.

I currently have three more episodes of Stranger Things season 3 to complete. I like it, but I do feel like it’s going slower than the past two seasons. Now you may be thinking I’m about to go and review it. I’m not (don’t worry), instead, I want to talk about the fashion. Stranger Things takes place in the early 80’s, a truly amazing time period fashion wise. A lot of the looks that became popular during that time are still popular today; high-wasted denim, abstract prints, crop tops, long blazers, and sweetheart tops. Into it! My sister was a kid during the early 80’s and I have always been obsessed with all of those family photos of her and my cousins. Their outfits are just dope. I was born in 1988, so I’m a 90’s kid.

Because I have always had a soft spot for early 80’s fashion, I decided to wear an outfit inspired by the new Stranger Things season. My outfit is a modern take of the popular stripe shirt trend from the early 80’s. 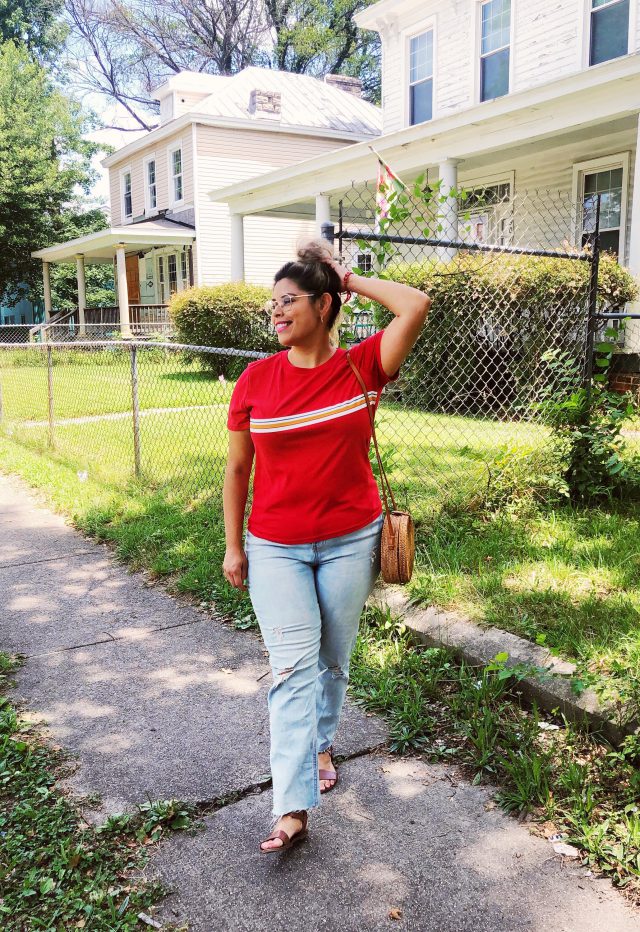 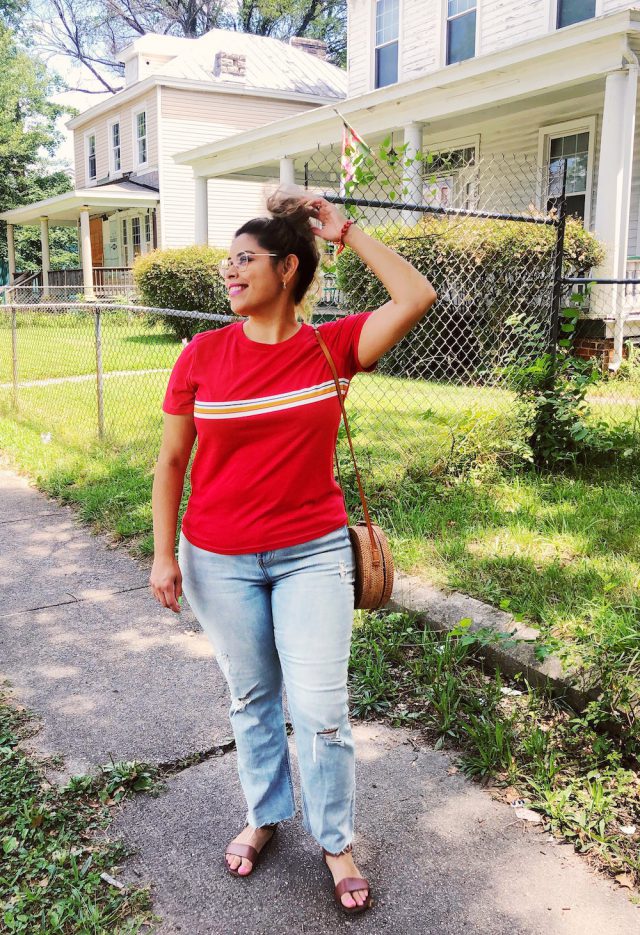 I also couldn’t resist having a little fun with my makeup as well. I mean, how rad was Mrs. Wheeler’s makeup in the first few episodes?! Mrs. Wheeler even went swimming and it didn’t even move — those oil based cosmetics from the 80’s must have been good. 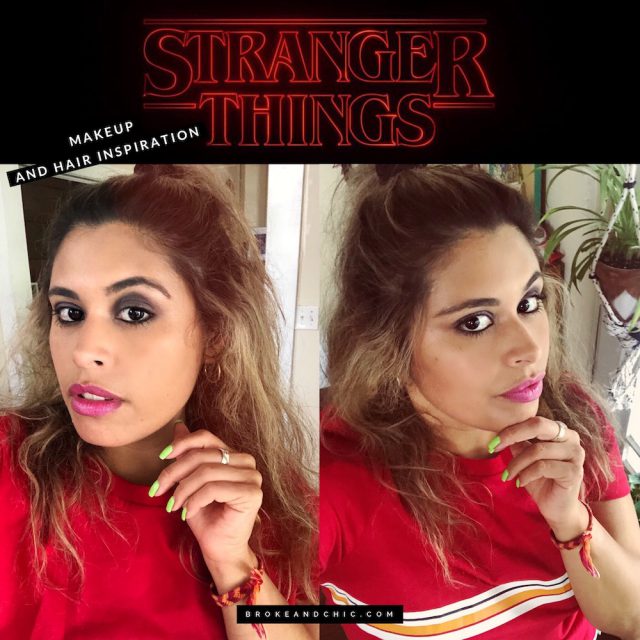 What do you think of the clothes inspired by Stranger Things? Think you would ever rock looks inspired by the early 80’s? Let us know in the comments below!