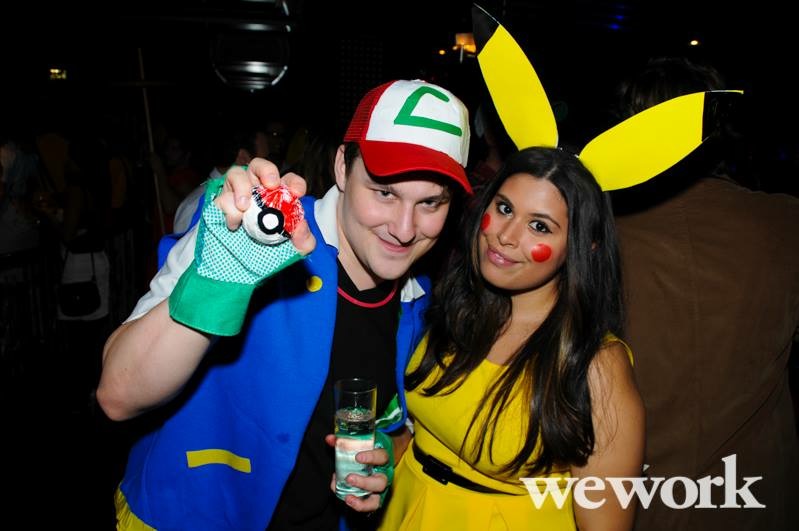 Halloween is my all time favorite holiday and it has been my entire life. I don’t know why, but dressing up as my favorite characters fills me with joy. It’s a day (or in my case, week 😜) where I can be someone else. Honestly, I should of pursued a career in acting vs. writing –both are equally hard to make it in tbh.

Well…acting would most likely be harder…but damn it would be fun to be an actress. Anyway, I don’t just love dressing up on October 31st, for me, Halloween is the whole month of October. Every October, I watch my favorite Halloween movies (Hocus Pocus, The Nightmare Before Christmas, Casper…) as well as all of the Harry Potter movies. I have done this every year for as long as I can remember. I also love to indulge in hot apple cider and caramel apples; and don’t even get me started on carving pumpkins.

When it comes to my Halloween costumes, I like to make them myself. Not sewing or anything like that, but search around to make the costume instead of spending a ton of money on a cheap costume. With my costumes, I can usually wear some of the pieces in my normal day-to-day looks after Halloween is over.

I’m also a big fan of couple and group costumes. Below are some of my all-time favorite couple costumes I have done:

This is by far my all time favorite couples costume. I put my heart and soul into this costume and I went all out making the Ash costume. I got really crafty with it; I even made the Poké Ball and the hat!

To make the Ash costume, I found green garden gloves, a red trucker hat, tennis balls, a pack of sharpies, and duct tape in various colors at a dollar store. The total was less than $10. For the vest, I found a plain white polo shirt and a blue sweatshirt at an Ocean State Job Lot for about $6 each; however both of those would be an easy find on Amazon. The grand total for that costume was less than $30.

Green Gloves: I just removed a good portion of the fingers so they would look more authentic. Also super easy.

Poké Ball: I wrapped a tennis ball with white duct tape and then used a black and red sharpie to make it look like a Poké Ball.

Ash’s Jacket: This was the most challenging, but the most fun. Despite it being challenging, this part only took me about 20 minutes. I took the white polo shirt and cut the front in half to make it go on like a vest. I then took the blue sweatshirt and cut off the sleeves; I then cut a line down the middle of it. From there, I had my friend put both items on–the white polo first, then the blue sweatshirt over it. I then got fancy with the duct tape. No sewing required!

I taped the blue sweatshirt around the white shirt in the front so it would be a vest. I then made sure the white color was over the sweatshirt. Once that was all done, I used yellow duct tape to add the “buttons” and to give the illusion of a pocket. I then lined the bottom edge with the yellow duct tape.

This was a few years back, and I really regret not taking more pictures of this.

For my costume, I purchased cardboard, a plain black headband, and construction paper in various colors at a dollar store to make my Pikachu ears. The grand total was less than $5. I ordered the bright yellow dress from Boohoo for only $20 and for my cheeks, I just used a red lipstick I already had. My costume was less than $30! 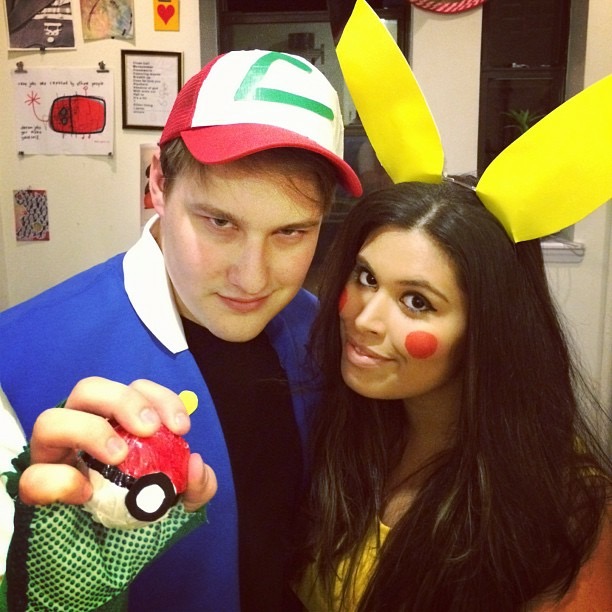 I’m a huge fan of Miyazaki films, so being Kiki and Tombo was a no-brainer for us. 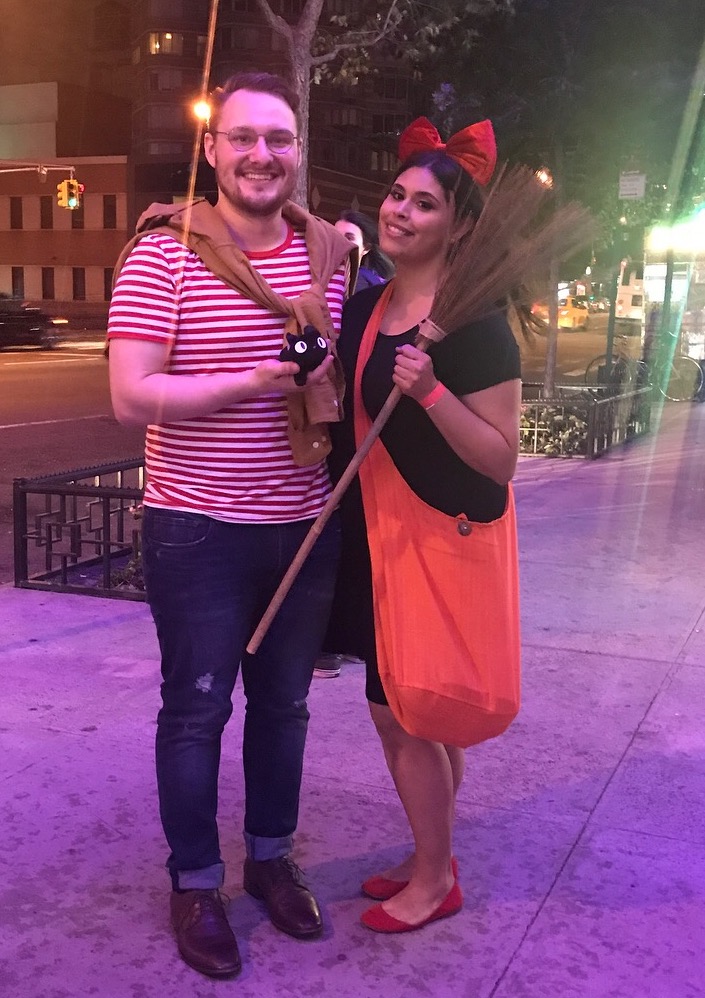 Below is a step-by-step for each costume.

Gigi Plush: I received it as a gift way before this costume was even an idea. However you can find one on Amazon.

You can shop the items below: 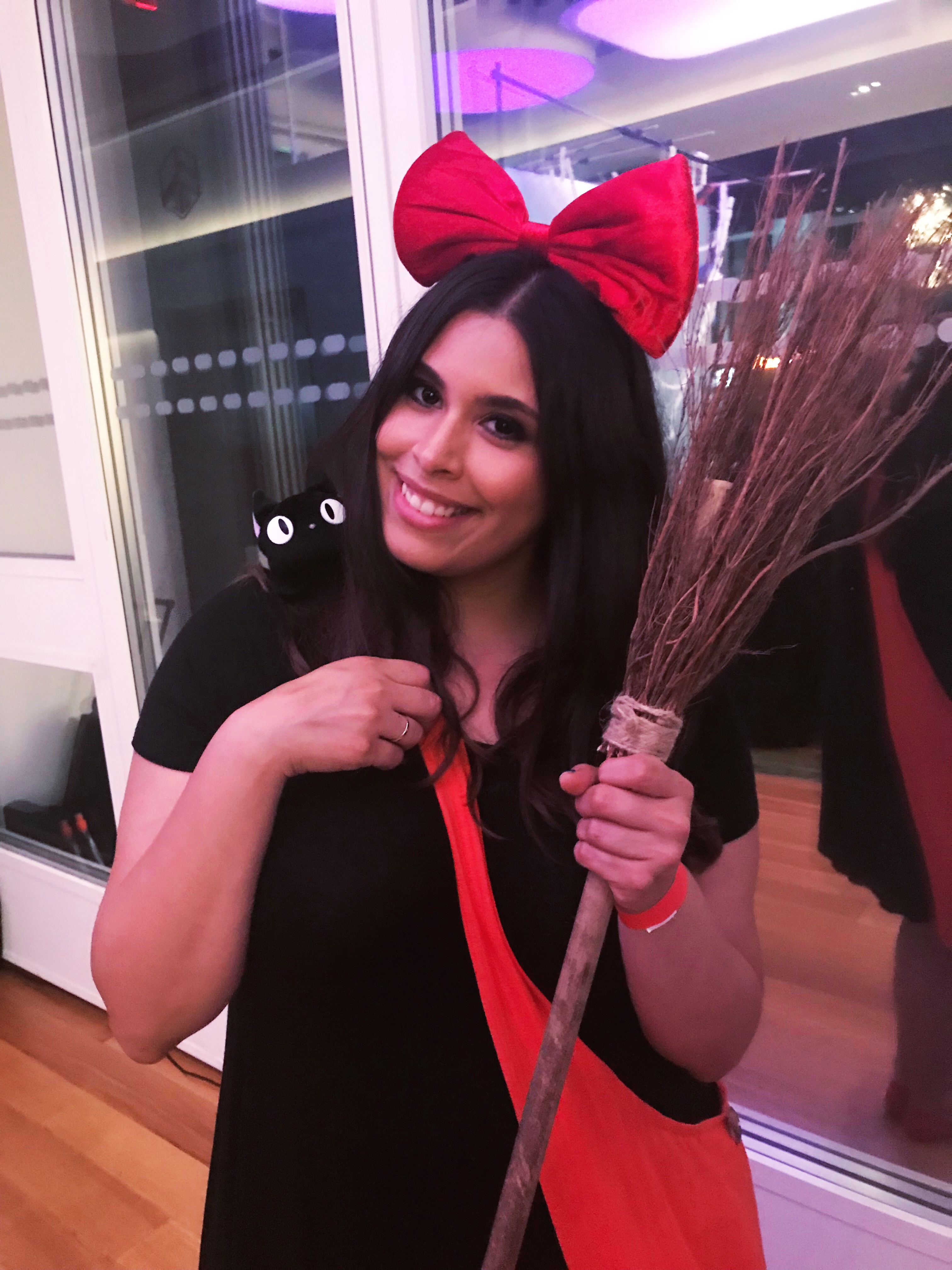 By far the easiest costume ever. Just order a red and white striped shirt from Amazon and then just have your partner wear blue jeans, and a sweater around their shoulders. Boom! Easy Tombo costume.

I really liked this costume, plus I already had most of the items already. Most people have a white button-up blouse, black tights, black boots, a black skirt, and an umbrella in their closet.

The only thing I needed to buy for my Mary Poppins Halloween costume was a red bowtie and the hat with flowers. I had to do a little DIY for the hat. I found the bowtie and hat at a Spirit Halloween store in NYC, and the flowers were found at a dollar store. I just glued the flowers on. 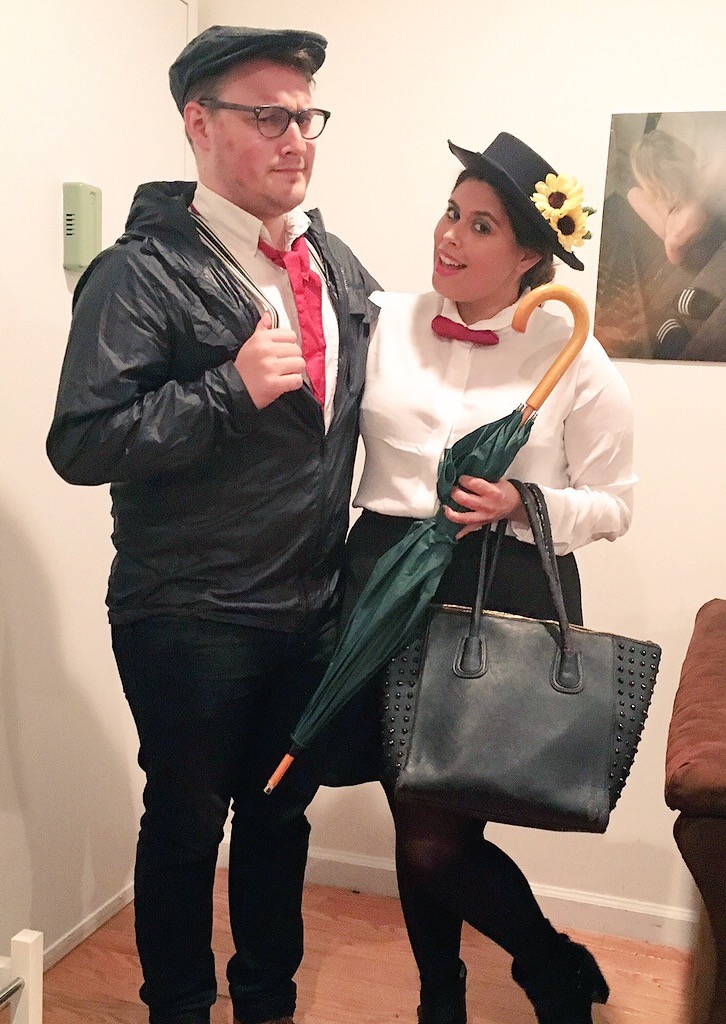 For the Burt costume…we could have done a better job…but it still came out okay. You can shop my Mary Poppins look below:

Spend Halloween in the Mushroom Kingdom by going as Princess Peach and Mario. 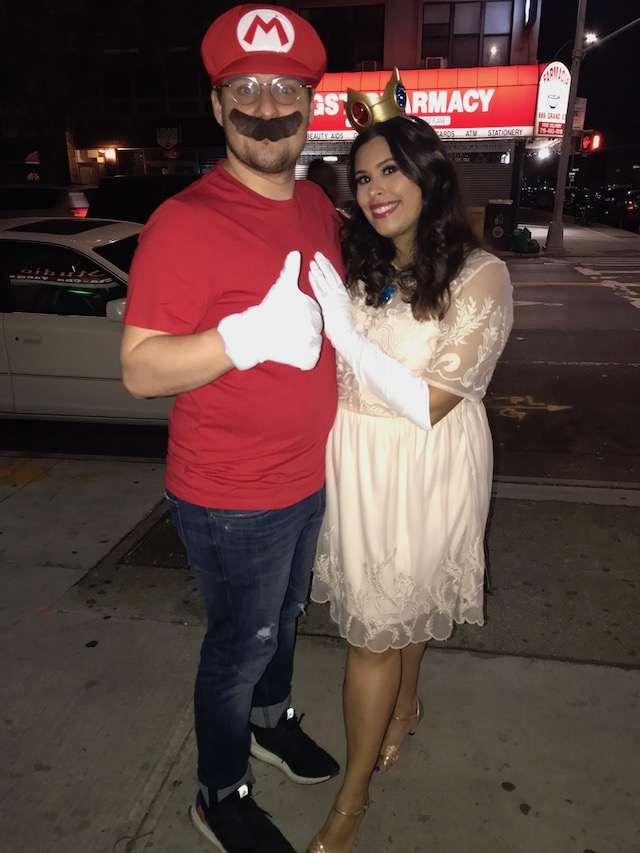 This was more of a lazy costume year, we both just bought kits at a Halloween store. The pink dress I already had, and I just used the sticky adhesive that came with my Princess Peach kit to stick on the blue emblem. Shop our Mario and Princess Peach Halloween costume below: 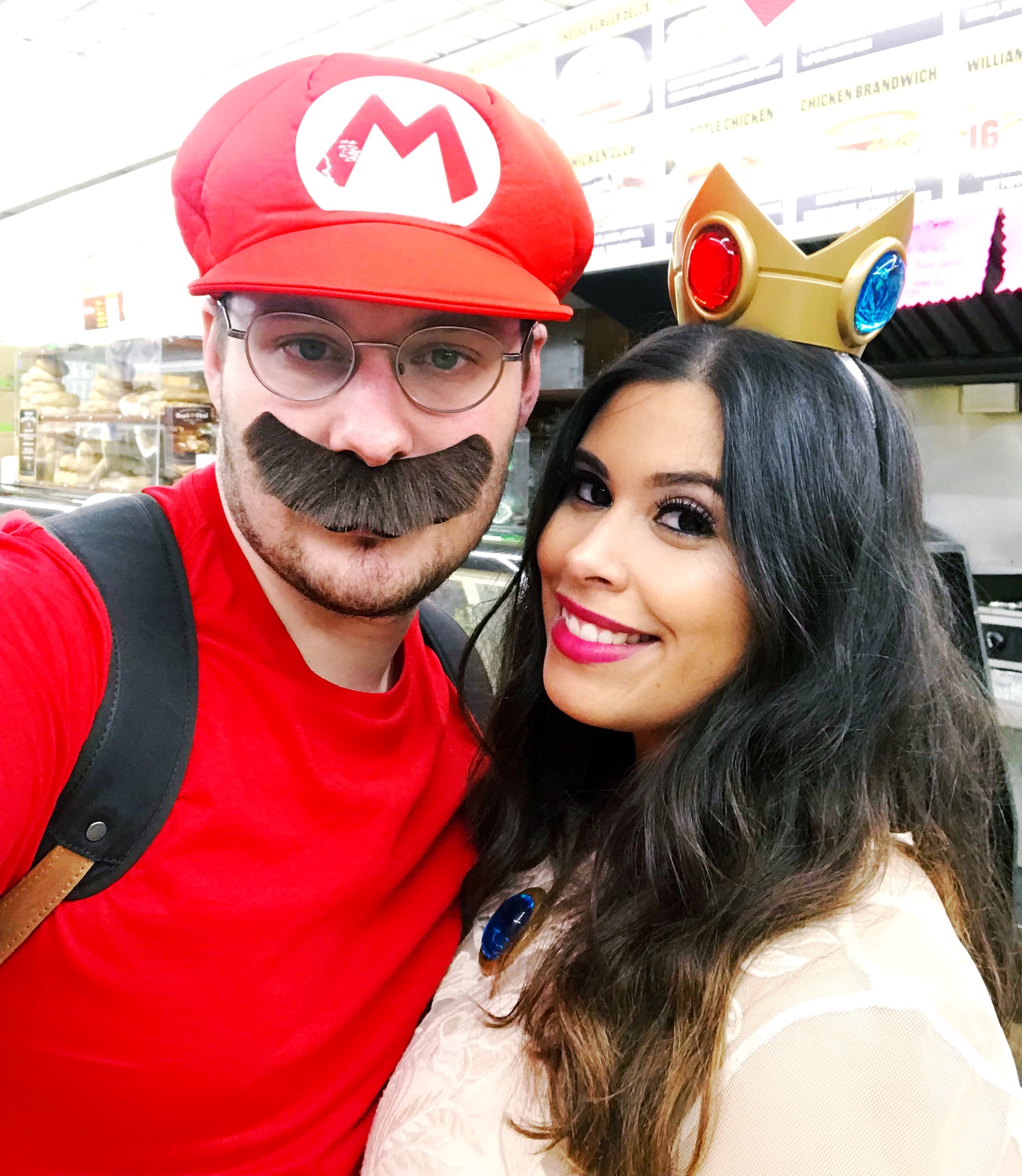 One year we decided to go as Princess Leia and Han Solo. It was such a fun year! So many people complemented us and my hair was 🔥. 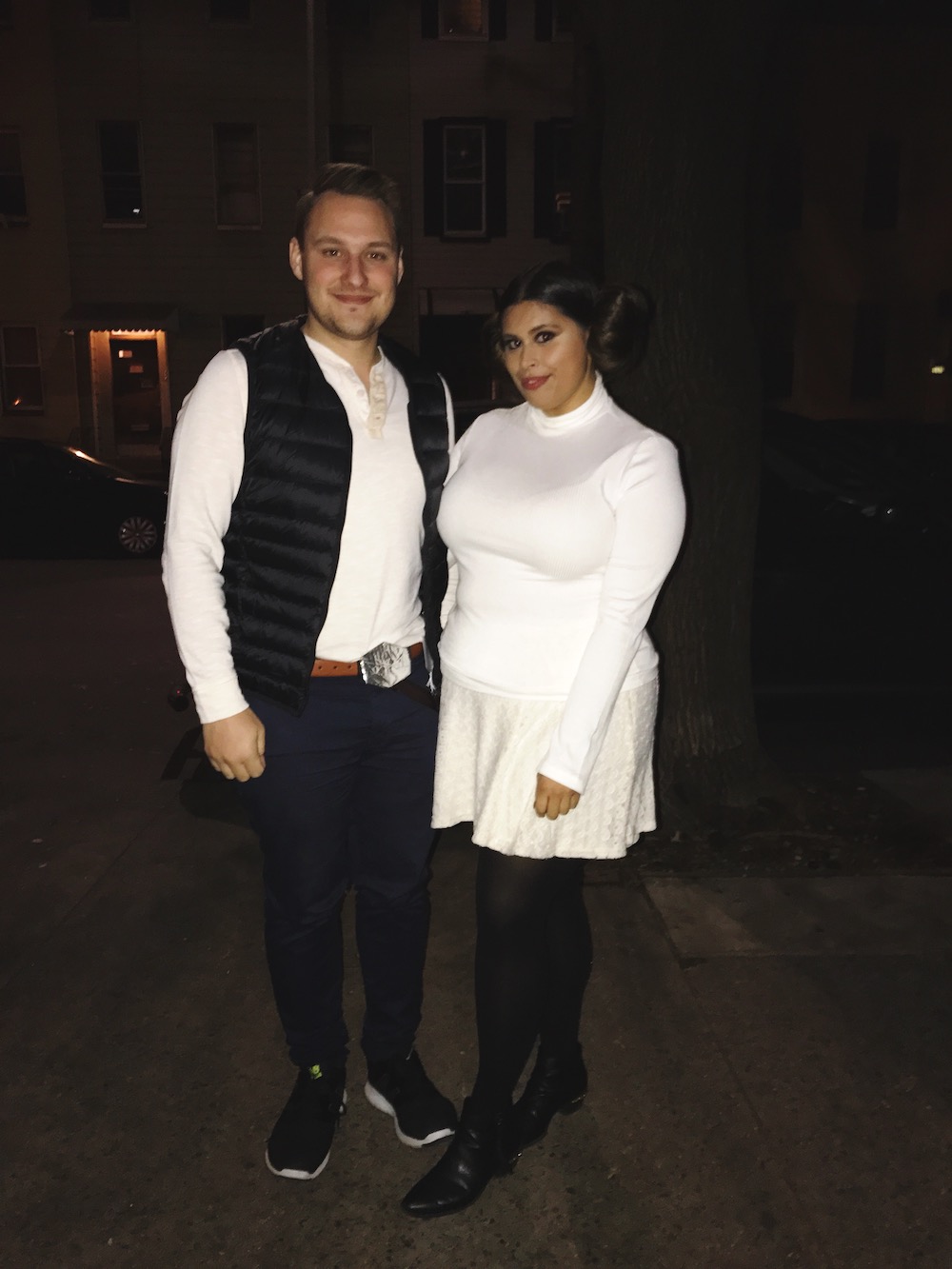 For my Princess Leia costume, I could have done a bit more, but I really didn’t want to spend that much money on it. I already owned a white turtle neck and a white skirt. The only thing I needed to buy were those hair donuts so I could make those bad ass Princess Leia buns. I was able to find them at H&M. 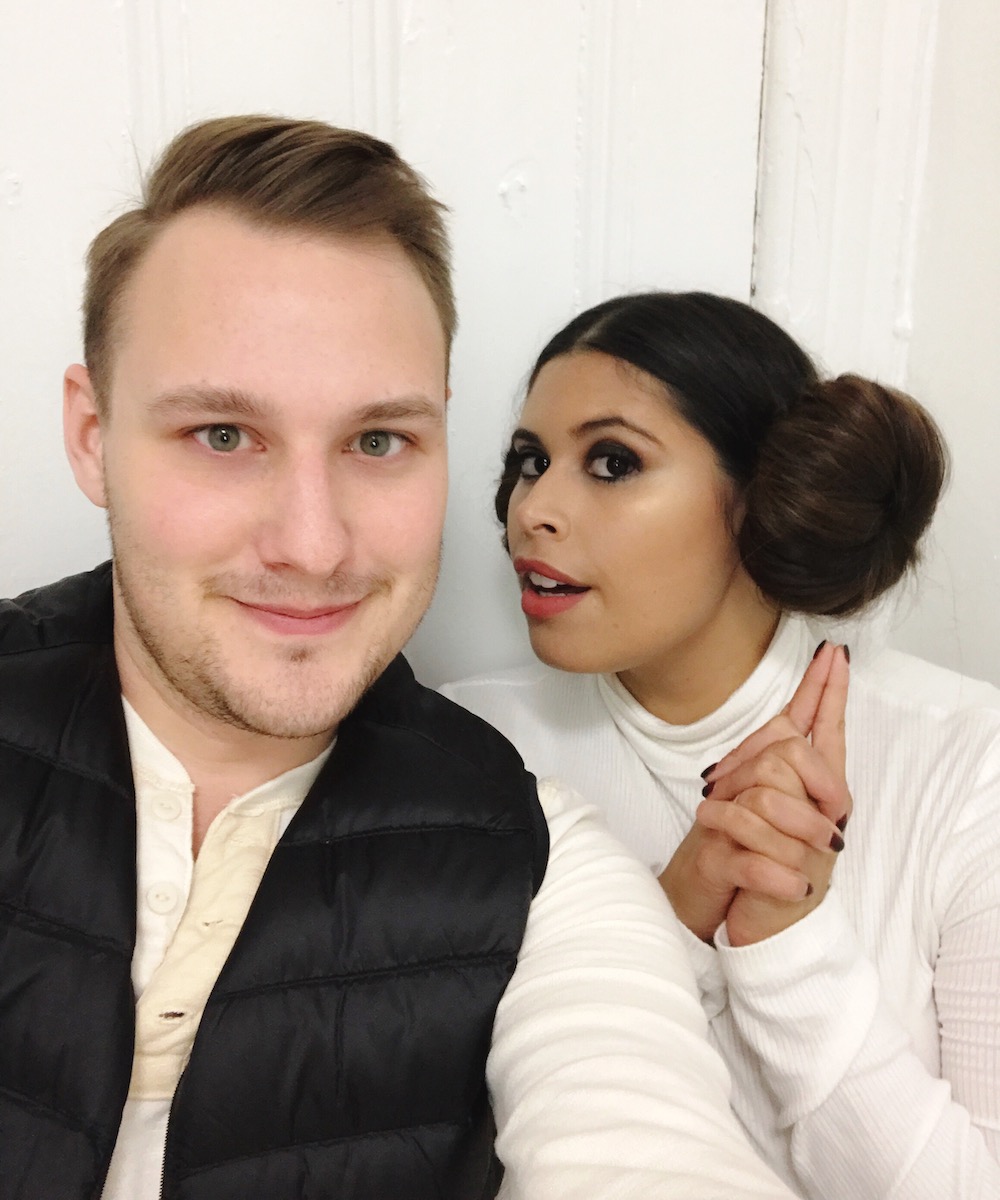 I hope you liked seeing a glimpse of some of my budget-friendly couples Halloween costumes. Despite what society tells you, you don’t need to spend a ton of money on Halloween costumes. Be sure to share it on Pinterest so all of your friend’s can get ideas, too! 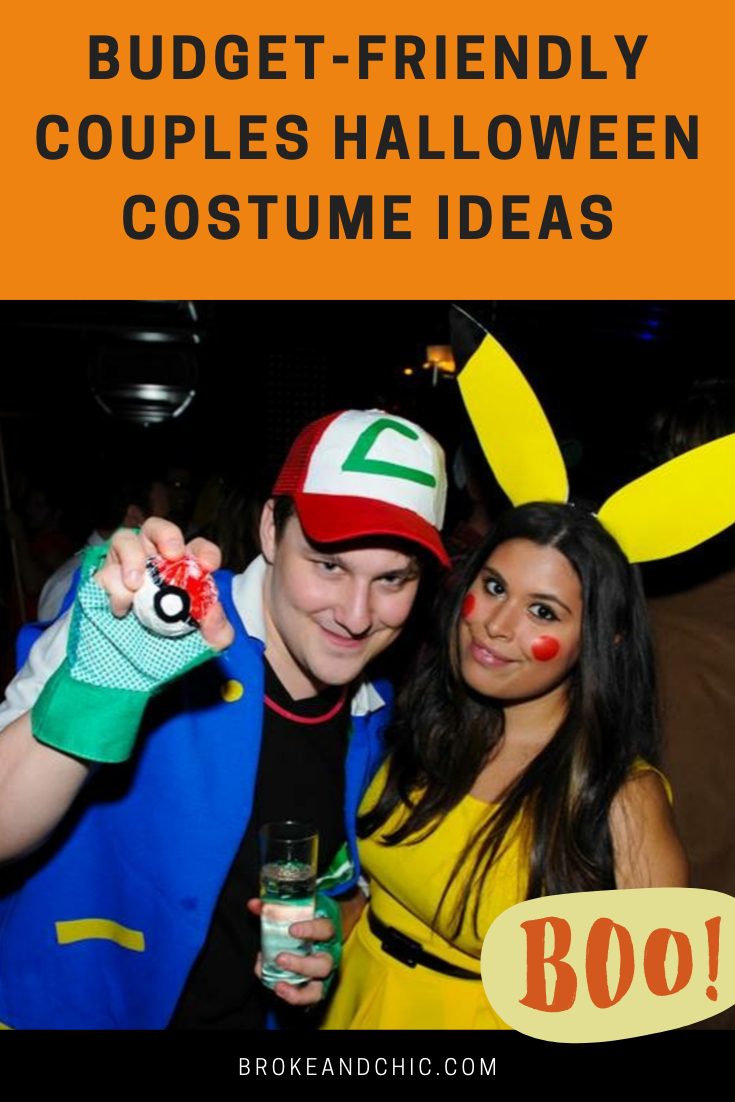 What do you want to be for Halloween this year? Let us know in the comments below!