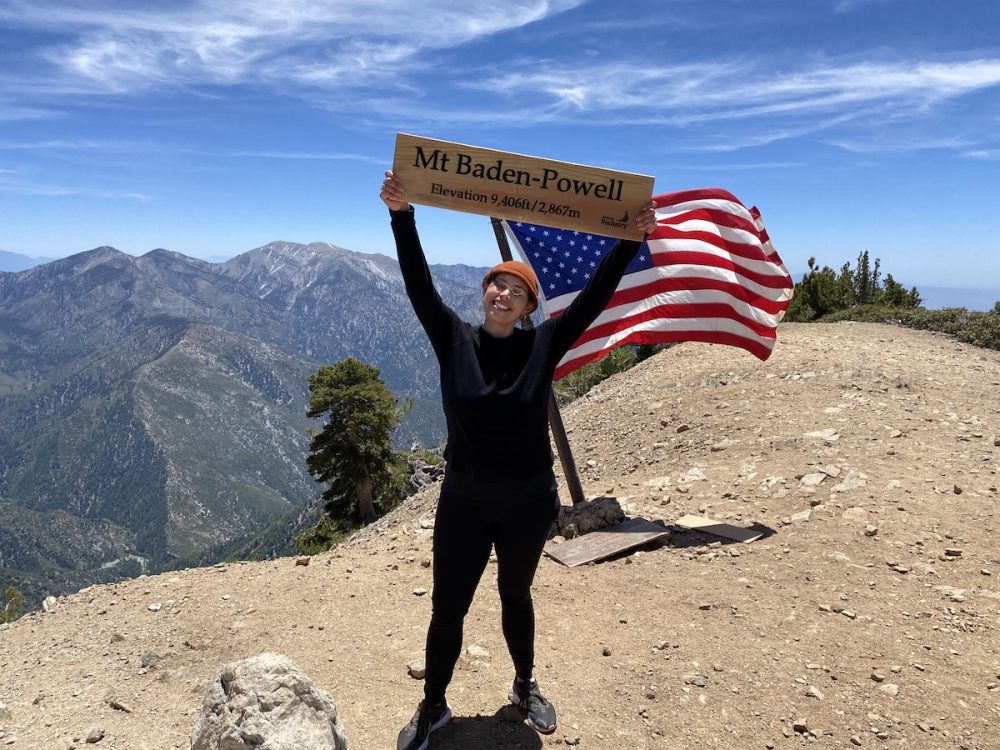 Things have been difficult for so many reasons, so my roommate and I decided to go on a hike in the wilderness to get away from the world for a moment. To breathe in fresh air. To be one with nature. To feel insignificant. I always feel so small when out in the wilderness and when I’m standing next to the ocean. In a good way, not in a bad way. It’s so much easier to self-reflect when you step away from it all and realize how beautiful planet Earth is, and how the Earth really doesn’t need us. It will grow, burn, and heal itself over and over. Humans are really just a painful thorn in the Earth’s side.

While we both aren’t newbies when it comes to hiking, neither of us are from Los Angeles—we’re both from the Northeast. He grew up in Massachusetts, I grew up in Connecticut. I also spent most of my adult life living in New York City, so I’m a city girl. I have had very little nature time as an adult. Hence the move. I decided to leave my favorite place in the whole world, NYC, to enjoy nature more. Enjoying nature in the concrete jungle isn’t the easiest thing to do. Here in LA? I drive two miles and I’m at the start of a hike that takes me above the city.

With that being said, all of my hiking in LA has been pretty desert-y (is that even a word?). Very hot, very little shade, and often a view of the ocean is possible. I absolutely love hiking near the Griffith Observatory, the Glendale Trail is a favorite. I have also done a hike in Malibu. But my roommate and I decided to do a hike a bit out of the city. He did the research, and I tagged along.

We both assumed that the hike would be pretty similar (scenery wise) to the other hikes we have done in the LA area…boy were we wrong! Just 1.5 hours away from DTLA, it’s 50 degrees colder and there is snow on the ground. Who knew?!

We went on this hike yesterday. It was 87 degrees in Los Angeles, but when we got to the trail head, it was 38 degrees. About 50 degrees colder! We’re both so happy we checked the weather before we went on the drive yesterday morning, otherwise we would of had to turn back. It just wouldn’t have been safe. To be honest, we weren’t prepared enough, but we made it work.

The hike we did was called Mount Baden-Powell Trail; it’s located in Valyermo, California—about 60 miles from Los Angeles. It’s in the Angeles National Forest. 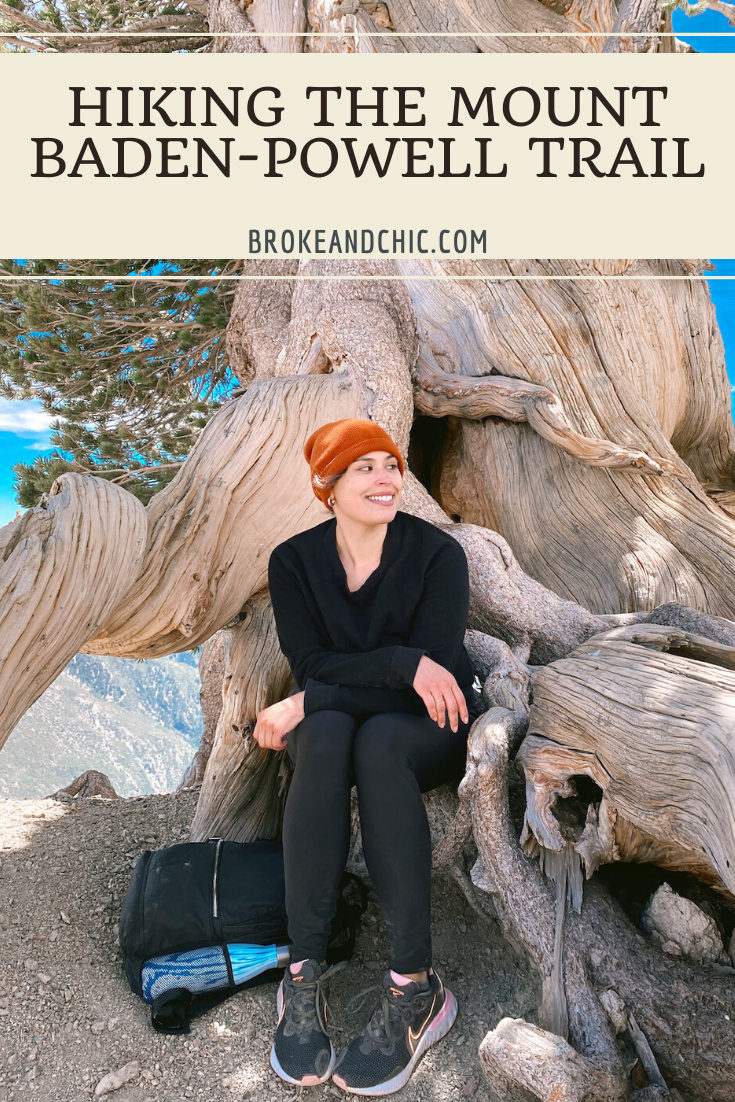 This hike was one of the most difficult hikes I have ever done. It was very strenuous—4-miles are uphill with no breaks. We climbed 2,788 feet to reach the summit via switchbacks! We learned after that this mountain in one of the tallest in the San Gabriel mountains. Whoa! I felt my ears ache as I got closer to the summit due to the elevation change. My breathing even changed.

The only sounds? The sound of us walking, light wind, and birds chirping. It was lovely and exactly what we wanted and needed. We were deep in nature. The views? Unreal.

We started to summit Mount Baden-Powell at 10am and we got back to our car at exactly 2:30pm. We did plan to sit up at the top of the summit to enjoy our lunch, but it was way too cold and windy. 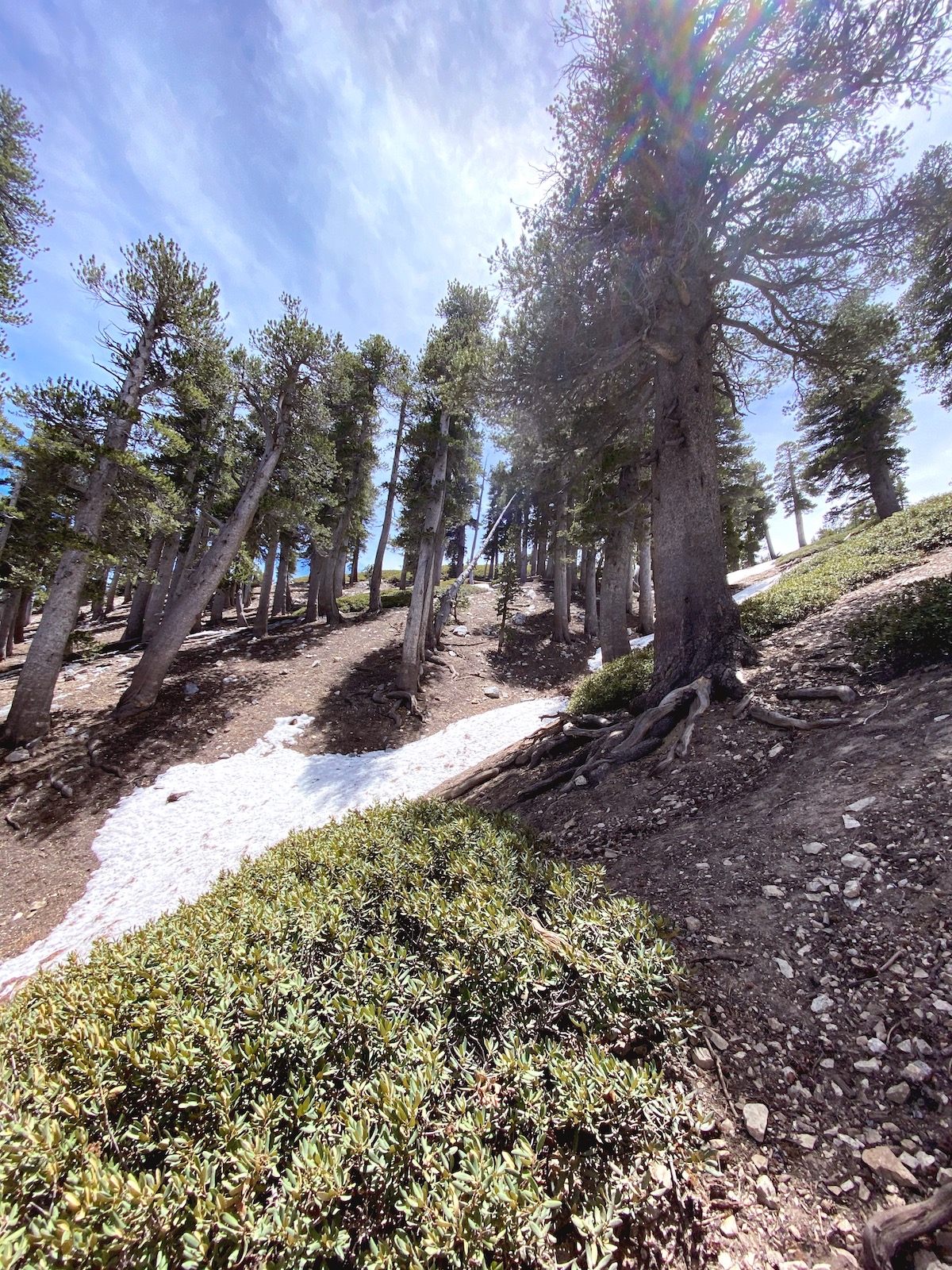 Take the scenic rout there, and take the freeway on your way back. While it is about 30 extra minutes of driving, the views are worth it. The scenic route will take you through the Angeles National Forest in the San Gabriel mountains. The Angeles Crest Hwy is what you want to take.

Driving on the Angeles Crest Highway

Be prepared for a long workout. My roommate runs marathons and I’m a spin instructor, so I would say we’re both in shape, however we were huffing and puffing the whole way up.

Bring walking sticks. We did not have them and we were okay, but they would have been helpful. Especially when we got to the snowy parts closer to the summit. Yes, snow.

Dress appropriately. We were not prepared for the cold. It has been 75-85 degrees in LA for weeks, so we expected the weather to be pretty similar on this hike. Boy were we wrong! We went hiking on June, 8th. It was 38 degrees at the summit! Definitely bring a beanie and gloves along with a jacket or layer with a few sweatshirts.

It was also very windy and cold at the top. We were able to take a few photos and then we had to leave. Otherwise it would of started to become dangerous since we were not dressed for that kind of weather.

Overall. This was an easy straight forward hike, however it was very strenuous due to the high elevation of the summit and all of the switchbacks. If you’re in-shape, you will have no problem doing this hike. If you’re not in shape, take your time, you’ll still be able to do it.

It was a nice day trip from hot LA. We both felt like we were doing an early spring hike in Vermont; that is how different the scenery was from LA. 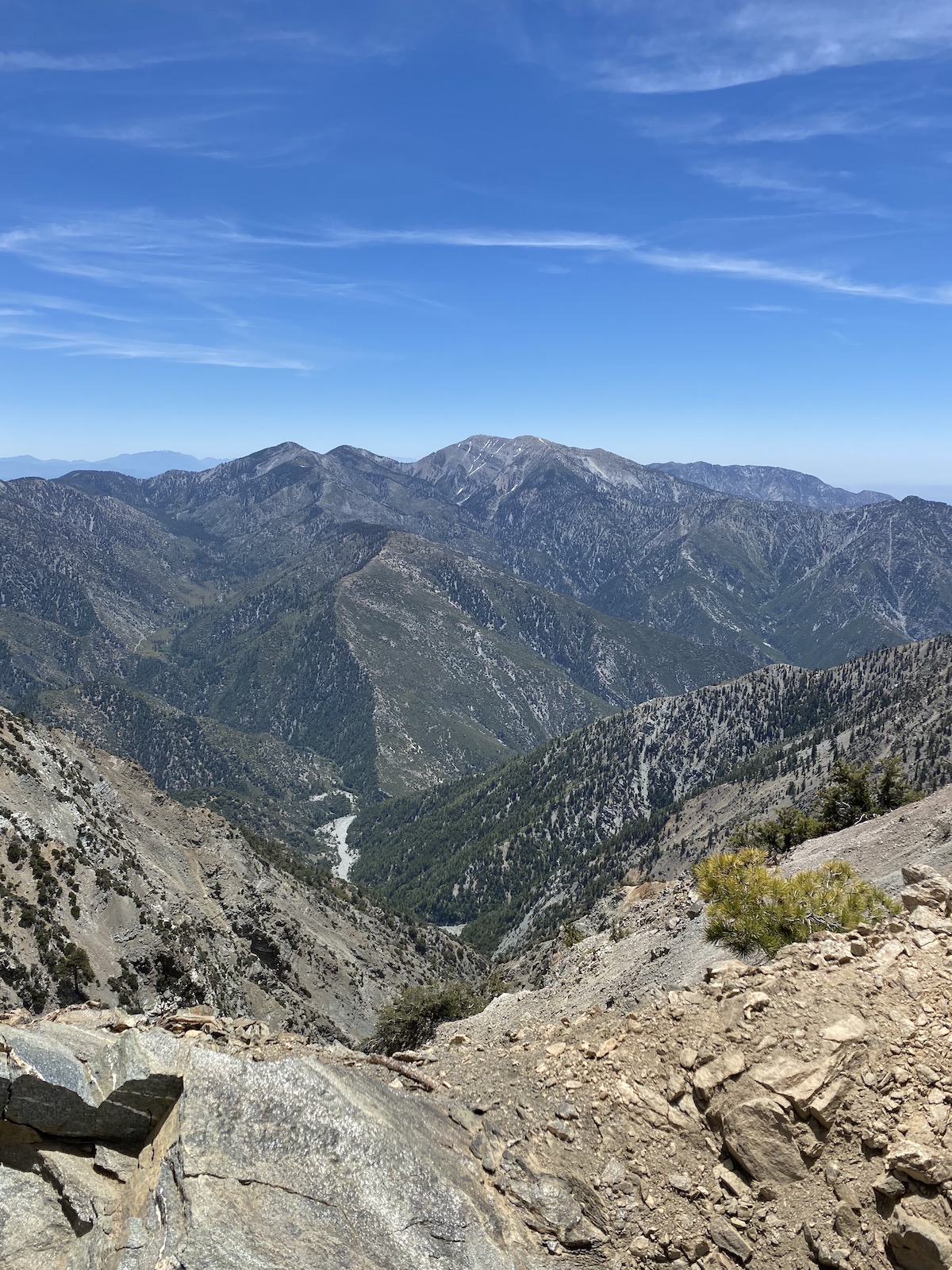 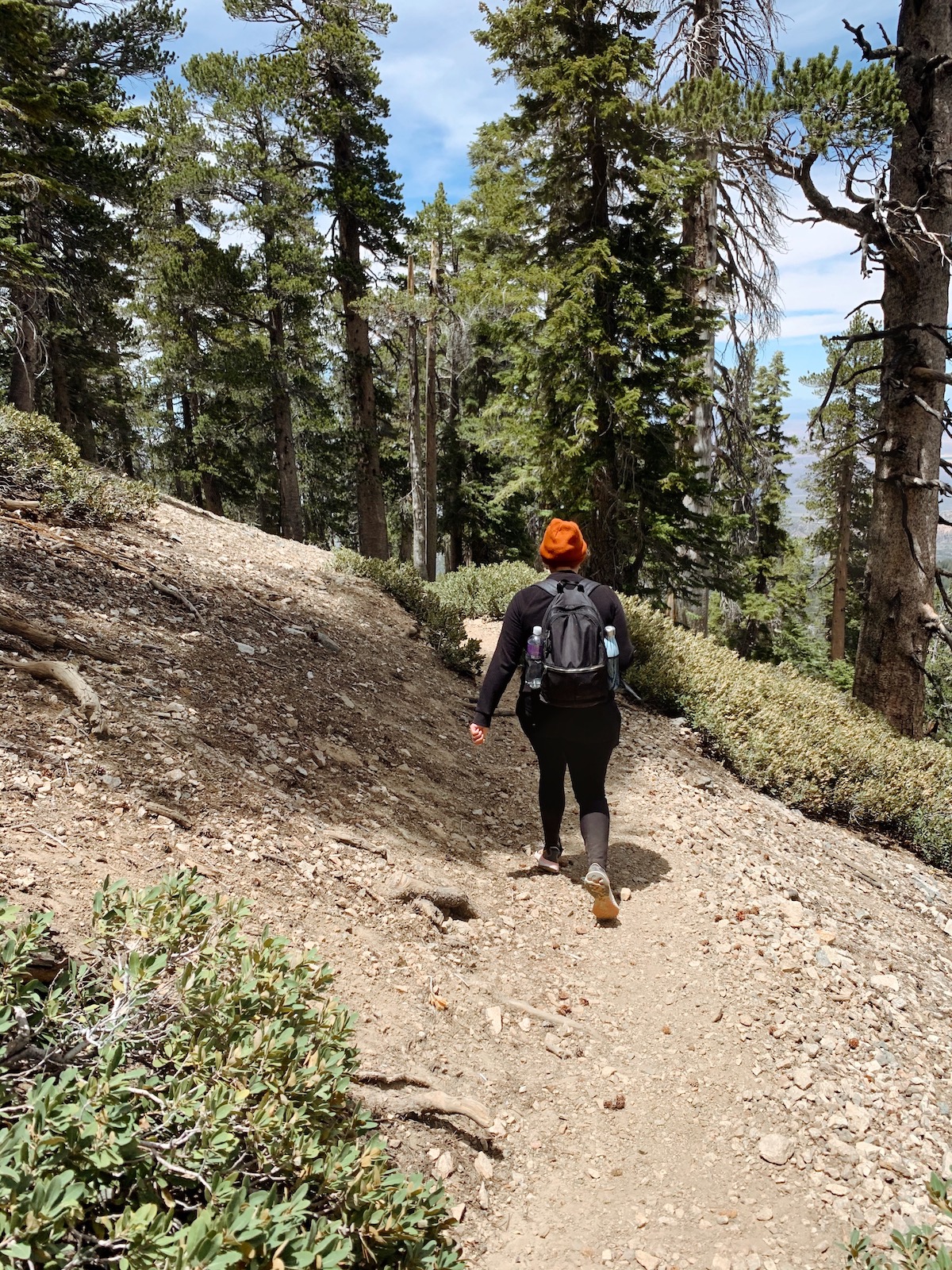 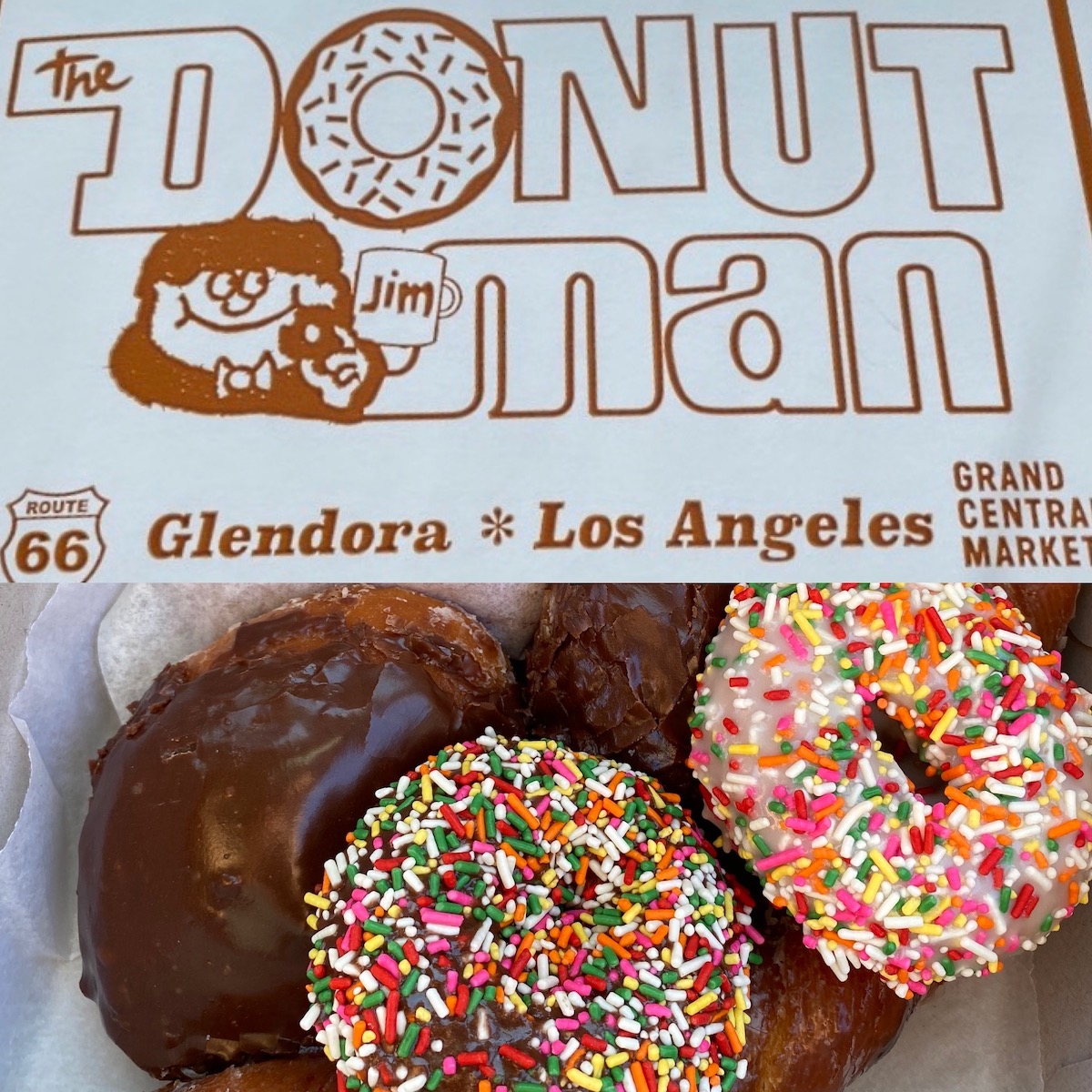 What are your favorite hikes near Los Angeles? Let us know in the comments below!