Does Chlorophyll Water Live Up To the Hype? 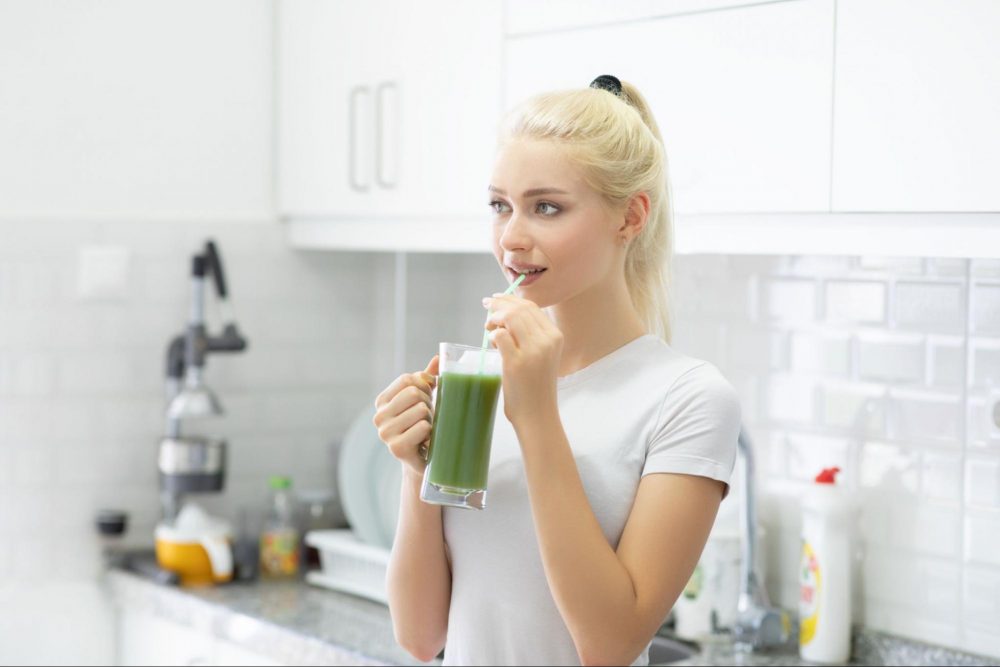 In case you’re on Tiktok, chances are you’ve seen jade-toned water being flaunted by bright-eyed and bushy-tailed influencers. Chlorophyll is certainly having its moment in the sun, with celebrities like Kourtney Kardashian and Mandy Moore endorsing it for gut health and clear skin. But before you decide to jump on the green water train, let’s take a look at the science to find out if chlorophyll water is legit or just another fad.

Cast your mind back to your school days and you might remember learning about chlorophyll – the compound in green plants that converts sunlight into energy during photosynthesis.

Well, it turns out chlorophyll is beneficial for humans too. Among the reported health claims, it’s a good source of essential nutrients like vitamins A, C and K, plus minerals and antioxidants.

While green veggies are a great source of this green pigment, chlorophyll is difficult to digest. In fact, only around 4% of it is actually absorbed by the body. What’s more, cooking vegetables can further reduce chlorophyll content, that’s why the water is often tinged green after boiling kale. Studies suggest that in order to reap the full benefits of chlorophyll, you need to consume 100mg per day – that’s the equivalent of 145g of kale or 85g of spinach. Chlorophyll drops used in chlorophyll water actually contain something called chlorophyllin – a water-soluble derivative that’s much easier to digest and absorbs faster.

Chlorophyll is an antioxidant with potential anti-inflammatory properties. Antioxidants help to neutralise free radicals in the body that are responsible for inflammatory reactions.

Chlorophyll may aid digestion by increasing the number of beneficial bacteria in the gut. With its potential antimicrobial properties, it can also reduce bad bacteria while maintaining a healthy variety. However, there isn’t enough solid scientific evidence yet on its effectiveness for gut bacteria to say for sure, so more research is needed.

Chlorophyll is used to detoxify and cleanse the body, but is there any truth in this? The body has a natural detoxifying process, the main detoxifying organ being the liver. Chlorophyll may support optimal liver health by increasing certain enzymes. A 1995 study published by Carcinogenesis: Integrative Cancer Research journal found that chlorophyll has the potential to reduce the risk for aflatoxin-induced liver damage in animals by increasing certain enzymes and removing bodily toxins. There again isn’t sufficient human studies to validate the results, but the results are promising.

It’s been reported that chlorophyll water works as a sort of “internal natural deodorant”, reducing bad breath and overall body odour. Research is mixed, but some studies have found that it can improve the breath of dogs by improving their digestion. Another study published by the Life Sciences journal in 2004 found that copper chlorophyll supplements reduced trimethylamines in Japanese populations with a condition called trimethylaminuria – also known as “fish odour syndrome” due to the characteristic unpleasant, fishy smell it causes.

Although there hasn’t been enough research to support the claims of internally deodorising the human body, many people continue to use it for this purpose.

So, can you sip your way to glowing skin with chlorophyll? Influencers might be peddling this, but it’s not quite as simple. Chlorophyll’s antibacterial properties may help reduce breakouts and bacterial skin issues when applied topically. More research is needed on whether ingesting chlorophyll can help clear and soothe the skin from the inside out. However, many green vegetables like spinach and kale are great for the skin and are also high in chlorophyll, so there might be something in this theory.

What Foods are Rich in Chlorophyll?

We all know that adding more green vegetables into your diet is a good start when it comes to giving yourself a health boost. Chlorophyll is found in abundance in dark leafy greens, algae and sea vegetables. When you consume whole foods, you’re also getting all of the other nutrients in addition to chlorophyll.

Chlorophyll can be a wonderful addition to your health regime, but all supplements should be enjoyed alongside a diet with a variety of fruits and veggies to maintain balance. Although most of us already consume chlorophyll in the form of green vegetables, chlorophyll drops with chlorophyllin are easier to digest and absorb. Chlorophyll is a potent source of antioxidants as well as being rich in vitamins and minerals. While there are many advocates of spirulina and its reported benefits, the scientific evidence for these claims is mixed or not extensive enough at this time to support most of them.

Have you tried chlorophyll water? Let us know in the comments below!