The lovely Katherine McPhee is Lucky Magazine’s February cover girl! The 2006 American Idol runner-up has created quite a resume for herself since her Idol days. Check out this great interview to see what she’s been up to. 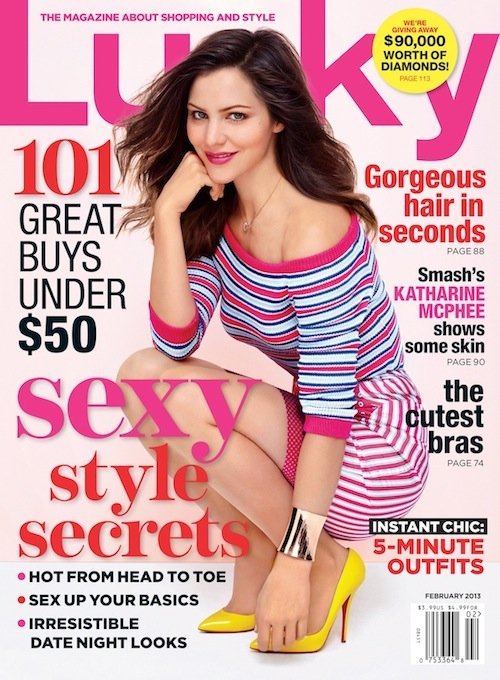 On her horrifying paparazzi photos: “Now I look back {at paparazzi photos} and I will be like, Where did I get those that that I was wearing? Oh right, they were sent to me by some PR company, and you think because they’re free, they’re awesome, but when you look back at the photos and you look horrible in them, I’m like, God, what was I thinking?”

On why you won’t see her stumbling out of night clubs: “When you’re on a show like this {Smash}, one that requires so much singing, you have to be really protective of you instrument. You don’t get to just, like, go out and party all night.”

On why she’s glad she doesn’t have children: “I once thought that by now I’d have lots of children, but actually I’m really enjoying being able to go from point A to point B and the only worry I have is have my dogs been walked. I’m selfish right now, but that’s how and where I should be. The thing is, work is the thing I love the most.”

On her feelings toward moving to NYC for Smash: “I don’t want to sound ungrateful, but I hated living in New York for the first six months,” said McPhee.

On the upside to living in New York versus LA: “I couldn’t really put my finger on it. There’s so much diversity on the streets here. You get to leave work behind when you leave; not everyone is an actor.”

On her strategic American Idol transformation: “Music was pretty much all I did growing up,” she says. “But I loved clothes. On Idol, I was very strategic with my look. I specifically wore very little makeup, did very little with my hair. I wore beat-up jeans and a simple jacket that covered my body up because I knew that viewers like seeing transformation,” says McPhee. “As a viewer myself, it was one of those things I looked forward to. It’s like when people watch Dancing With the Stars: They love to see the stars lose weight and start to feel confident. So I wanted to create that story—actually to push the story that I had no idea about fashion—which was not actually true.”

On why she is weighing in on her Smash wardrobe: “I realized I needed to put attention and time into clothing. It would be easy to put together a Helmut Lang top and jeans and ankle boots—and it looks fine, but doesn’t take it to the next level, especially on television.” McPhee goes on to say, “I know what looks good on me.”

On where she sees herself in five years: “In five years I’d love to have done a play and a few movies, and of course I hope Smash keeps going.”

Steal Her Look For Less

We here at Broke & Chic loved her three outfits! We found they were 60’s mod mixed with 60’s housewife…adorable. Here’s how to recreate the looks for less!