What Trends To Expect Next Year, According To NYFW 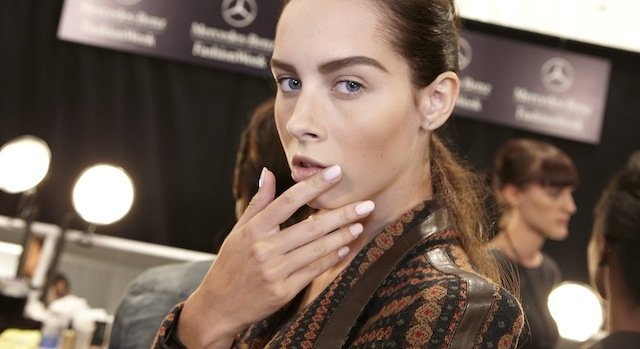 In the fashion world, we’re usually two and a half seasons ahead of the game. All of next year’s Spring and Summer trends have been decided by top designers at New York Fashion Week, and will continue to be decided in London, Paris and other extremely fashionable cities this September.

After spending time backstage and attending quite a few shows, we noticed a common trend between designers: blue and embroidery. For the past two seasons, we’ve seen a lot of sheer tops, studs and flatforms. These trends will carry us into Fall and Winter, but once the s/s ’13 season hits, we’re going to start heading into a different direction. No more super badass “it-girl” fashion for a bit. Sorry Nasty Gal!

Next year it’ll be all about laid back glamour. Almost every designer last week showcased a collection inspired by early and mid twentieth century glamour. Think Anita Page, Mary Pickford, and yes, Rose Dawson from Titanic. Some designers stayed glamorous, but with more of a Jackie O inspiration…with a dash of wealthy 1950’s housewife.

Let’s look a little closer at a few shows and presentations B&C attended over the past week:

According to the designer:

The collection was inspired by the “Bon Vivant” attitude and the Cafe Society Generation of the 1930’s. 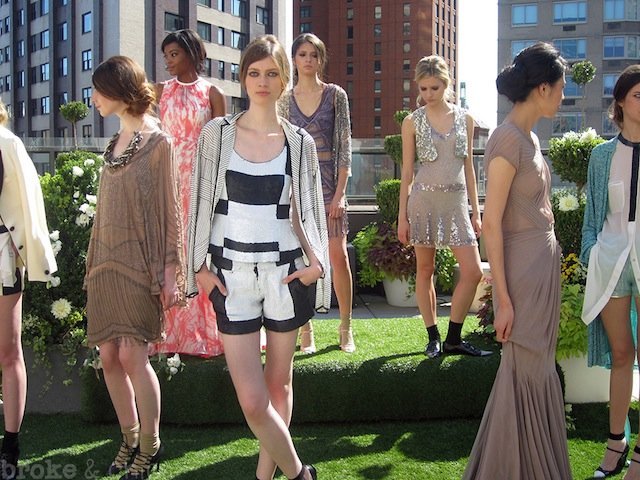 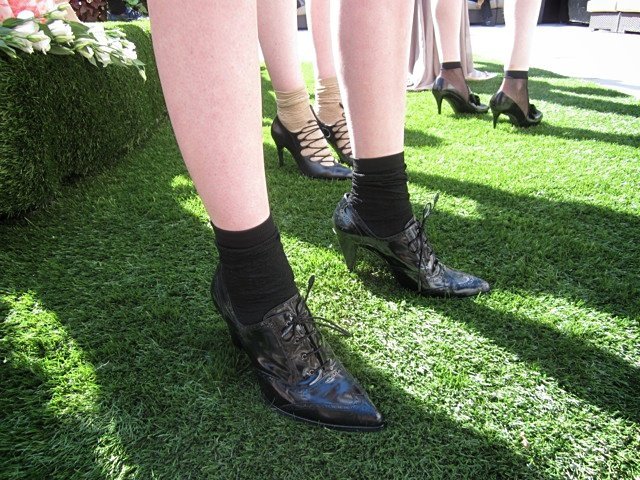 This collection had french inspiration mixed with a dash of The Stepford Wives.  The Fotini S/S ’13 collection finds its roots in the muted color palette of 18th century French Painters. Watteau, Boucher, and Fragonard — all of these artists used delicate colors to create sumptuous looks. According the the designer:

The collection is designed for a woman of mystery, elegance and grace; someone who imagines she is sitting for Fragonard to paint her in The Swing with cupid and cherubim fluttering around her. 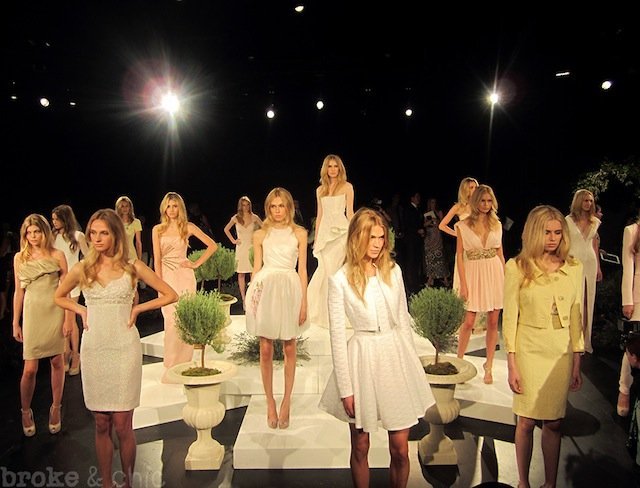 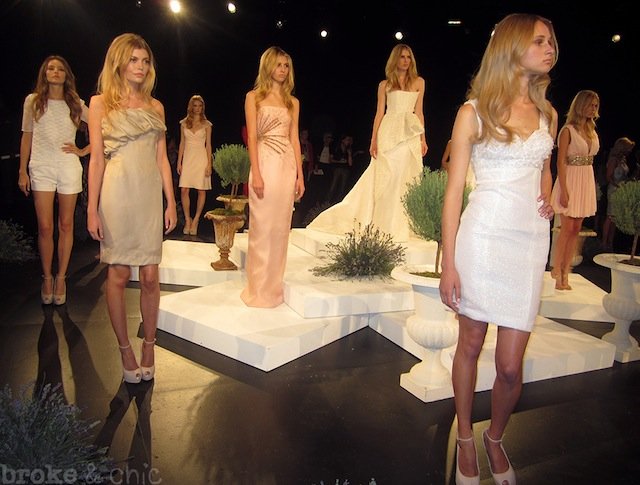 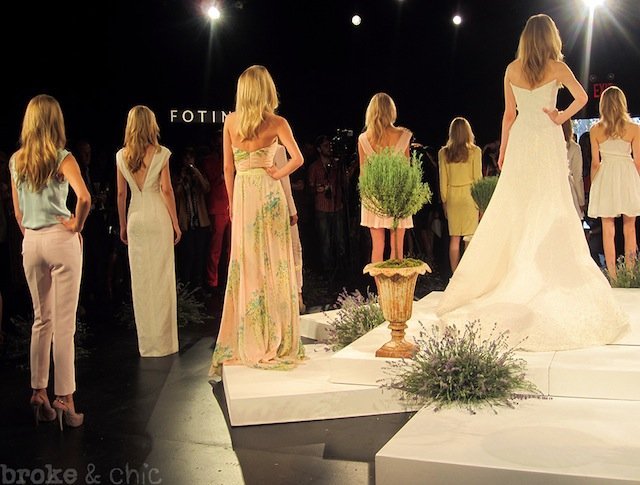 The hair was lead by Linh Nguyen of Cutler Salon. The nails were lead by Teresa King, and the makeup was lead by Deanna Melluso of Obsessive Compulsive Cosmetics. According to Melluso:

To go along with the designers French and Wisteria Lane influence we went for a fresh clean look meant for the simple girl in control.

Nguyen kept the hair long with tons of volume and soft curls (just like Bridgett Bardot), and the nails were painted a simple nude color. 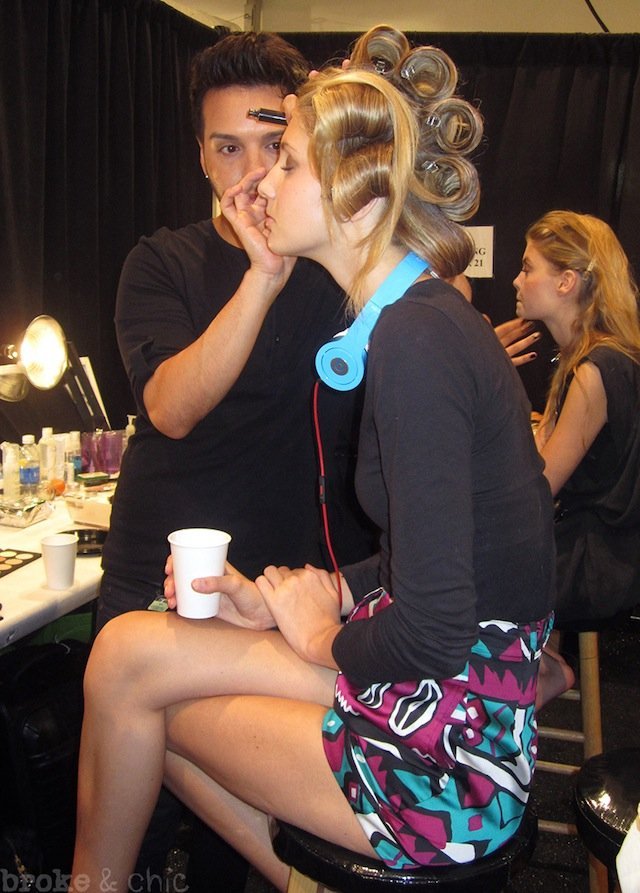 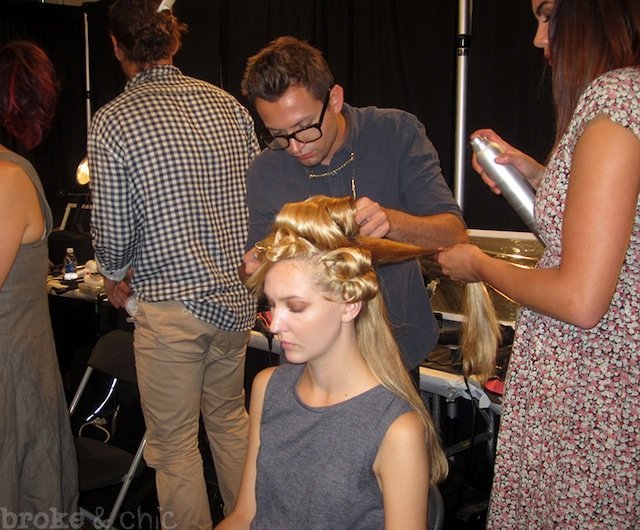 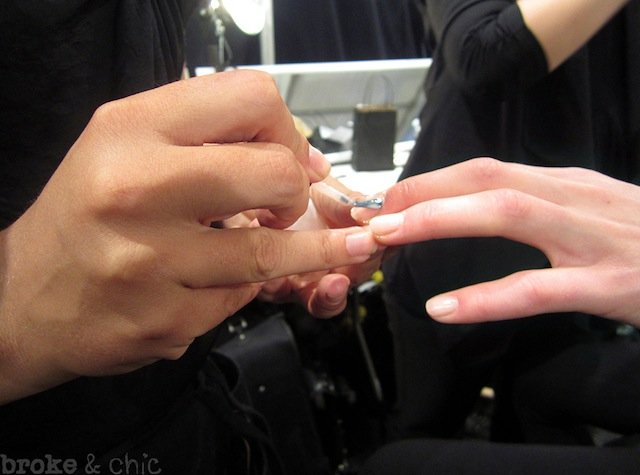 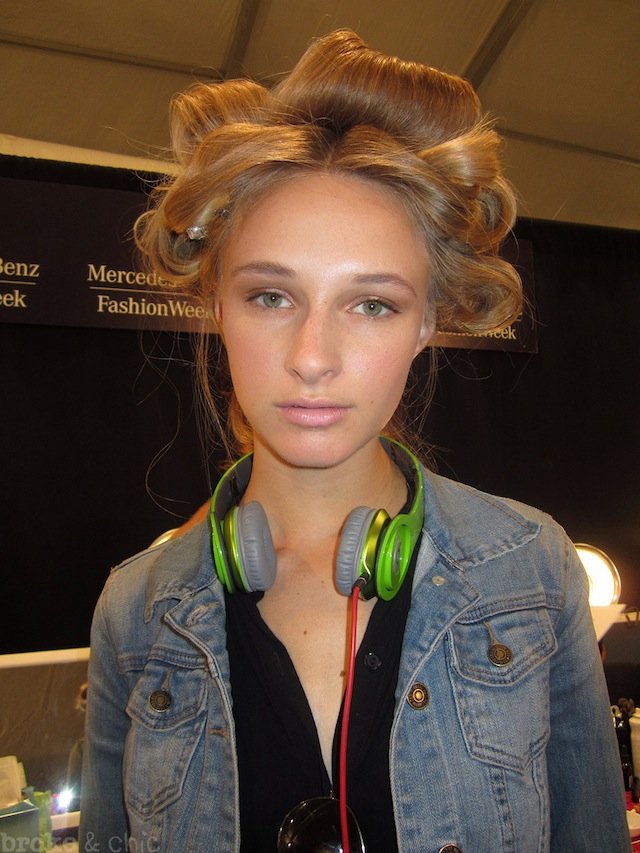 This was one of our favorite shows held at Lincoln Center. Both the Milly ready-to-wear and accessory collections had tons of black and white mixed with neon.

The designer says she was inspired by the concept of surrealism. Again, the model’s make up was left extremely simple, with a pop of neon on the eyes. The lips were made nude, and only bronzer was added to the cheeks. 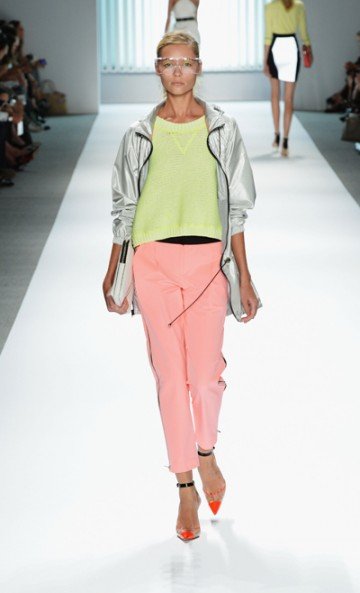 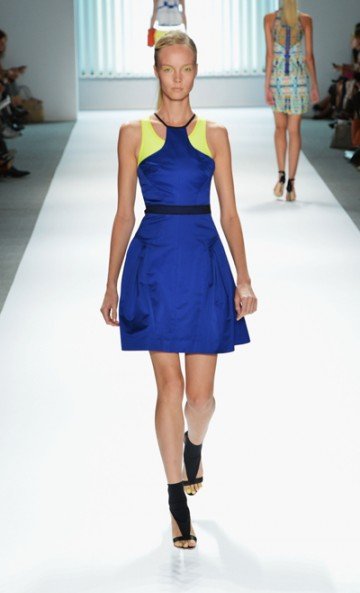 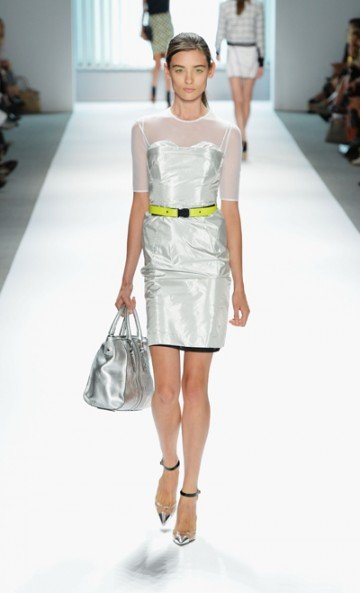 Broke & Chic got to spend time backstage at the Whitney Eve show. Whitney Eve was launched in 2008 by TV personality Whitney Port, and the collections evoke a girly nature with a touch of punchy sass. Growing up in Los Angeles and having lived in Manhattan, Port says she “blends the ease of California style with the sophistication and edge of New York City life.”

For hair, the models were given a messy up-do that looked sleek from the front, with white bobby pins criss-crossed on the side. 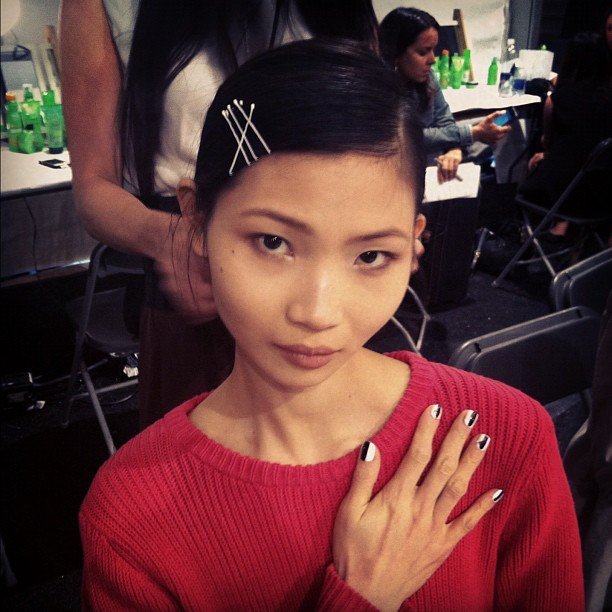 The nails were done by Zoya, using polish colors that matched the collection. 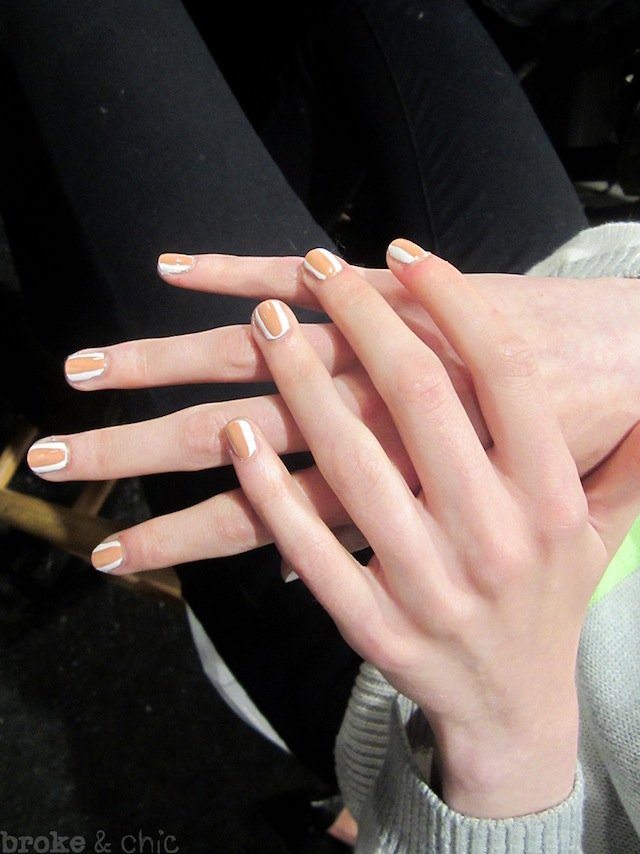 To get all the details about the makeup, we were able to have a quick chat with Kryolan’s lead makeup artist, Dominic Cruz. According to Cruz:

We went very simple. Nude lips, gold shimmer on the chin and cheeks, brown taupe on the eyes and dewey skin. We wanted a very translucent look.

Port says the collection was inspired by the crown jewels of London. The collection features prints that evoke precious stones and crystals. What do you think of it? 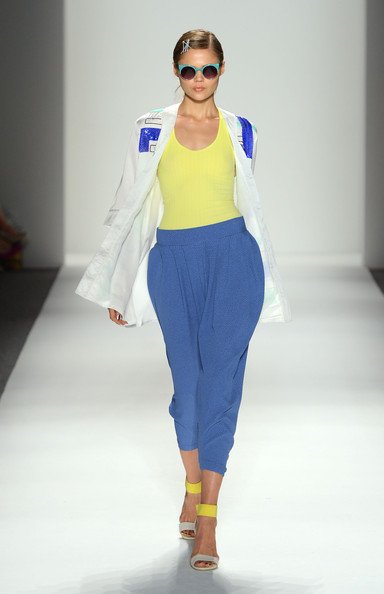 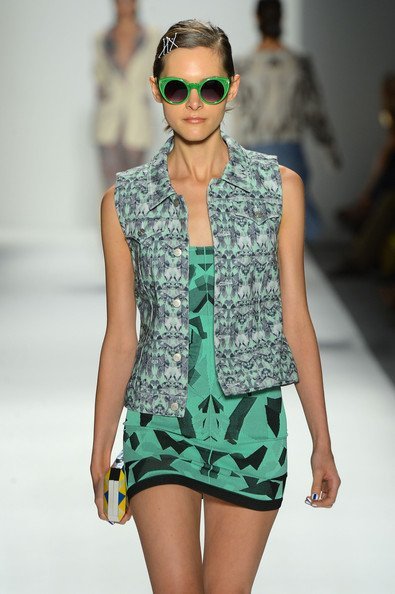 The Clover Canyon, Spring 2013 collection was inspired by the vibrant colors and textures from the American Southwest landscape. The allure of the open road, decked out cars, automobile metallic textures and the large open sky.

We got to have a quick chat with the lead manicurist, Gina Edwards for imPRESS Press-On Manicure by Broadway Nails. According to Edwards:

Since the colors of the collection are bright we all decided to go soft and whimsical for the hair, makeup and nails. 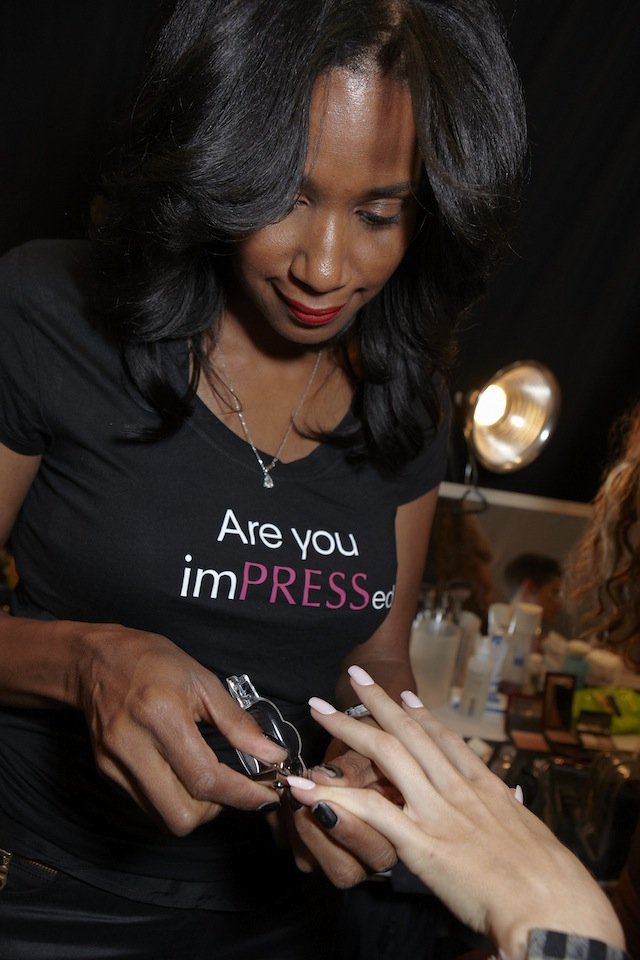 Edwards applied an imPRESS Press-On Manicure by Broadway Nails in ‘High Hopes’  — a pale and understated pink shade, for a whimsical take on the collection. 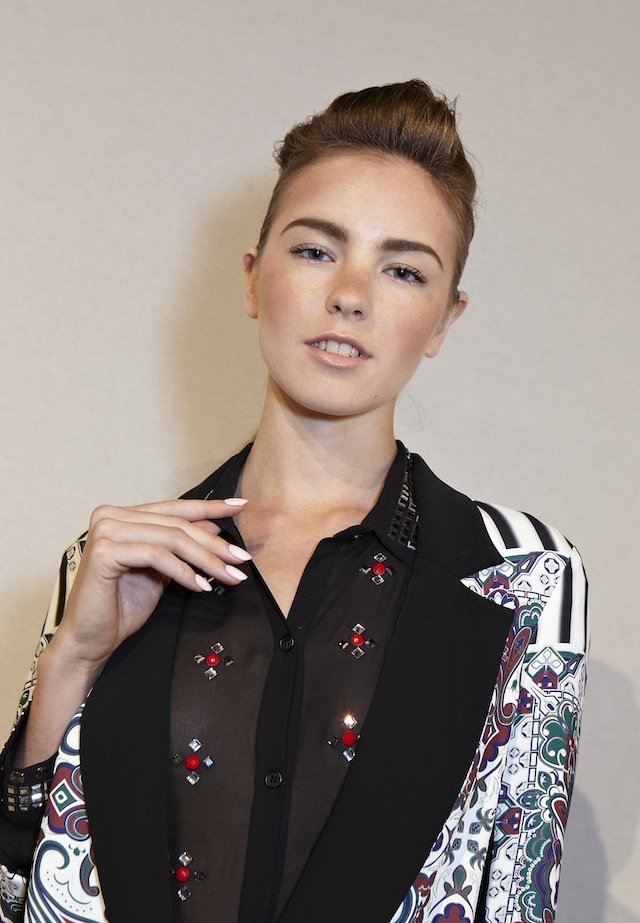 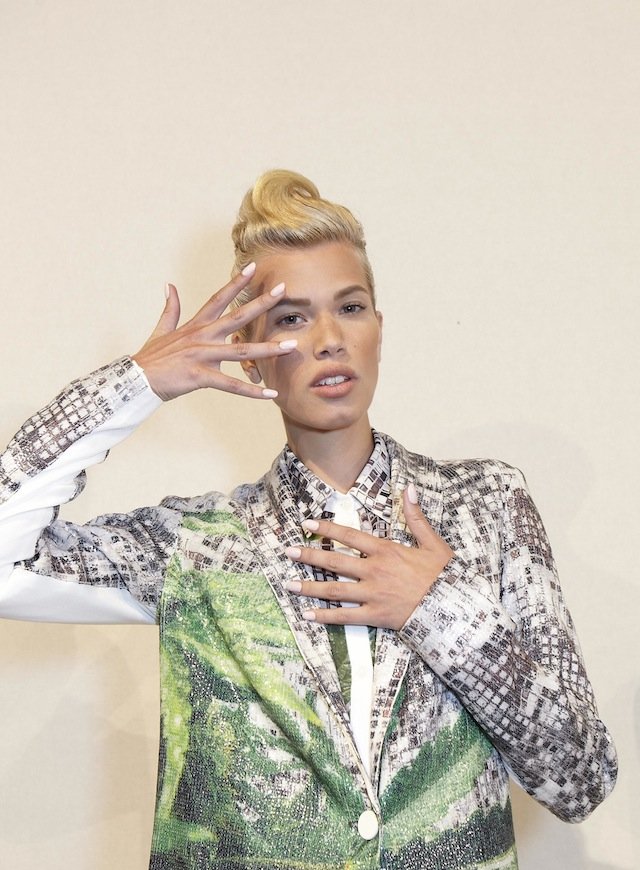 For the makeup, everything was kept pretty simple, except for the brows and cheeks…tons of bronzer! The hair, makeup and nails all blended with the collection so well! 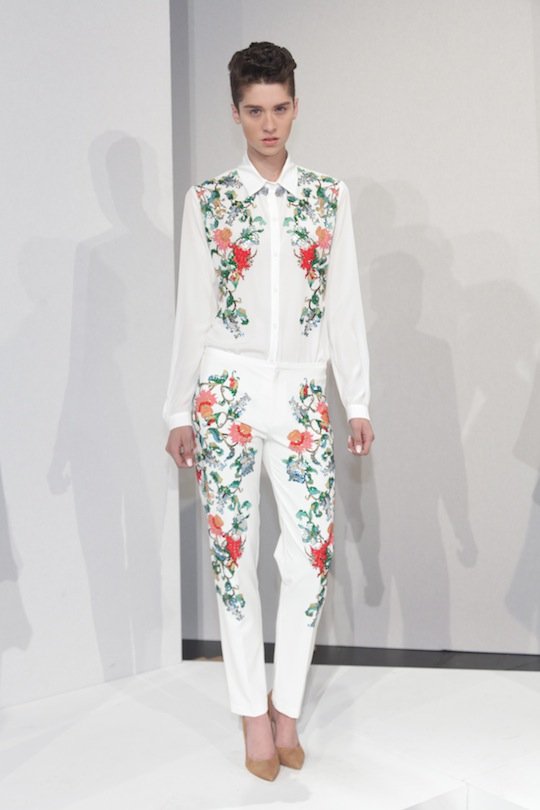 All the flowers are embroidered on. 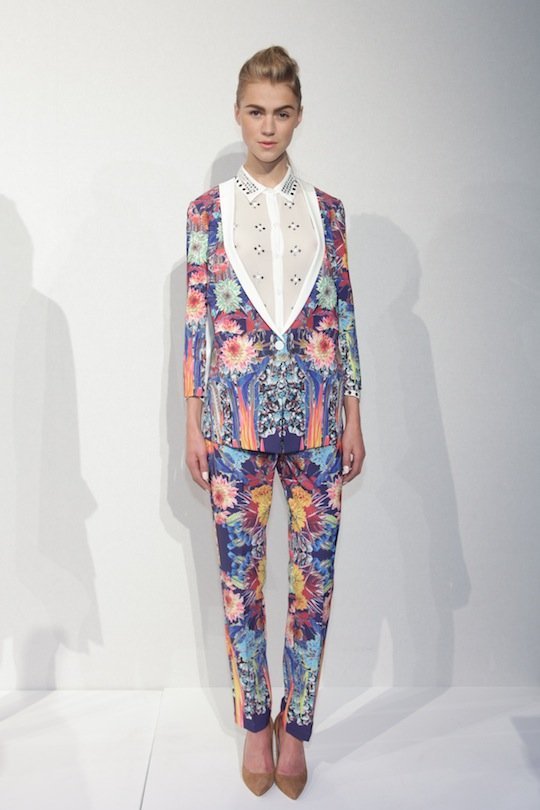 We have a hunch that Miranda Kerr would love these pants! 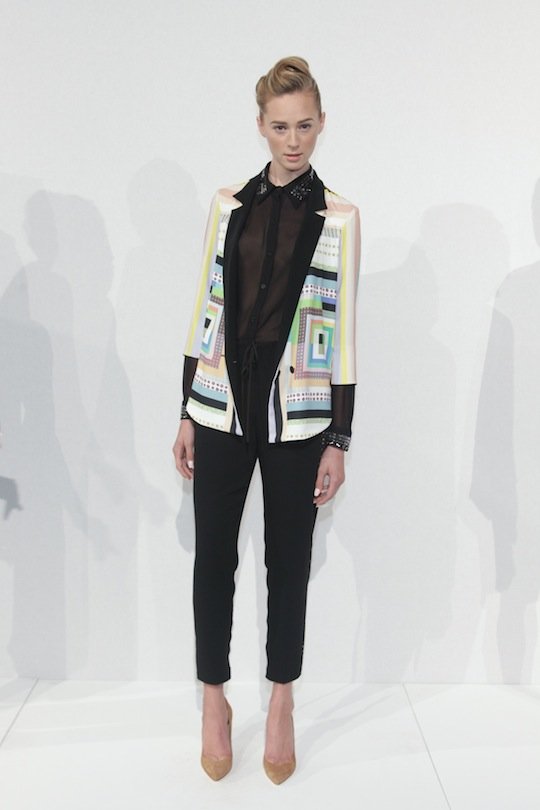 * A big huge thanks to Kristine Ayala of Beauty in NYC for sending B&C to cover Fotini, Whitney Eve, and Clover Canyon in her absence. She is a wonderful beauty and fashion blogger and I hope you all take the time to check out her awesome blog!

After paying close attention to these five collections on Day 6 of New York Fashion Week, we now have a good idea of what’s going to be trending in both beauty and fashion next spring.

Nude and Brown Pumps are going to be the shoe of choice for those nights out on the town. Both were prevalent for the Fotini and Clover Canyon presentations. If you’re girly yet daring, you might want to try wearing a cute pair of socks with your heels when March comes around!

Simple Makeup is going to be more common, so if you’re not a huge makeup fan, then 2013 is going to be the year for you! Barely there lipstick, gold eyeshadows, light bronzer, mascara and nude nail polish will be taking over your cosmetic bag. If you do like bold makeup, the deep red lip and bold brow will be in too!

Long Hair with Light Volume and Messy Up-do’s will be the hair-do’s of choice.

Embroidery is something that was in almost every collection this season. Beading and sequins will slowly but surely make their way into your closet.

The Colors for s/s 2013 are going to be blues and muted brights mixed with black, white and tans.

What are your thoughts on these collections? Let us know in the comments below!