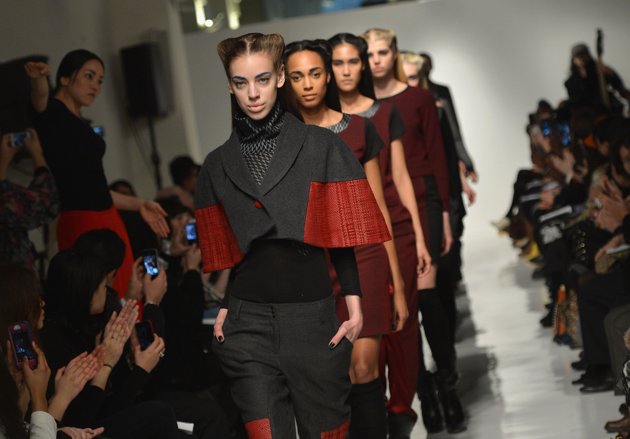 Update: Images have been deleted to protect model’s privacy. She doesn’t want this article to affect future modeling opportunities.

Earlier this year, we got together with talented fashion photographer Marcus Cooper for a shoot with Melissa Crew*, a model from Holland who lived in New York City, but has recently moved back to Europe. Below is Melissa modeling for French Magazine, Sciences Occultes.

[Image has been removed.]

Melissa was discovered by accident while performing as a street musician in Paris — that’s when her life changed in a New York minute. In a matter of weeks, she was whisked away to Manhattan to live in a model house on the Upper West Side.

Many amazing opportunities came her way: she walked during Fashion Week, was in the March 2013 issue of Nylon, and worked with big names such as DKNY and Cake Mag.

Read our interview with Melissa below where she shares what she REALLY thinks of the modeling industry in the United States.

[Image has been removed.]

How did you get into modeling?

Melissa: I was in France during the summer of 2012 with a good friend of mine; we wanted to cross off being street musicians in Paris from our bucket list.

While performing, a random French lady stopped and stared at me and started texting. After about 5 minuets, the whole camera crew from TV2 France was standing in front of me asking if I had always dreamed of being a model.

Then I thought, I might as well try it. Modeling wasn’t on my bucket list, but it always intrigued me that you could earn money by doing a semi duck-face.

Once I got back home, I looked up a few Dutch agencies and did one test shoot in Holland. A few days later, they flew me to New York City.

I love the idea of fashion as a way to express yourself and explore your creativity. I actually made my  graduation dress out of an old Ikea curtain — not because I couldn’t go to the store and buy one, but because I really love creating stuff.

Whether it’s creating music, art, literature or conversation, I love it. But now that I’m actually part of the fashion industry, I really don’t care for it too much. It’s a bullshit world driven by money — every trend on the catwalk is capitalized to death before you see it.

It’s not like the head designer of Kenzo randomly woke up with a vision of a cool tiger sweater. Hours and hours of work by trend watchers are behind it. These watchers only have one purpose, to ask “what is the next market gap and how can we play on it to earn money.” So forget the real fashion world. I made two rules for myself when it comes to fashion:

2. Don’t over spend. Go to thrift shops, or eBay that shit.

What are your favorite budget friendly places to shop in the United States?

I loved the super run down thrift shops in Queens and Brooklyn.

Do you think living in NYC has changed you at all?

Try working for an agency that sells you big bullshit with a lovely smile and wants you to work without a proper visa (they can since most models are either too eager to work as a model or just a bit stupid).

Try going on crash diets before fashion week, because you have “chubby cheeks” although you still fit a size 2.  Try going to fashion shoots for magazines — while you’re having a nice bagel and making idle chit-chat with the hair stylist, they’ll look you in the eyes and say: “honey, you’re not here to talk or eat carbs, so please do neither.”

So yes, New York probably took the last naive bone out of me. New York model life is not for me. Maybe if I were a bit more insecure, I would have lasted longer.

When you’re in a hurry, what’s one thing you can’t leave your house without?

My cigarettes and rosebud lip balm.

What’s your least favorite trend at the moment?

Besides modeling, what else could you see yourself doing in the future?

No clue yet. After I fled New York, I went back to Paris where I had my own apartment. Now I’m preparing for my double bachelor from Berlin University in Germany: law and philosophy.

Who knows what will happen after that? Maybe i’ll become a street musician, a bartender, a lawyer or maybe i’ll just change the world.

Even though there were some downs, Melissa is honored she was able to experience it. She met a lot of awesome people and learned a lot of valuable life lessons!

“It ended up being an interesting color on my personality palette.”

What’s your opinion of modeling now that you’ve read this article? Let us know in the comments below!

*Name has been changed.